Padua is situated forty kilometers west of Venice. It is home to Italy' s second oldest university; founded in 1222. It is a pilgrimage city as well. In fact Padua is the resting place of saint Anthony (from Lisbon). 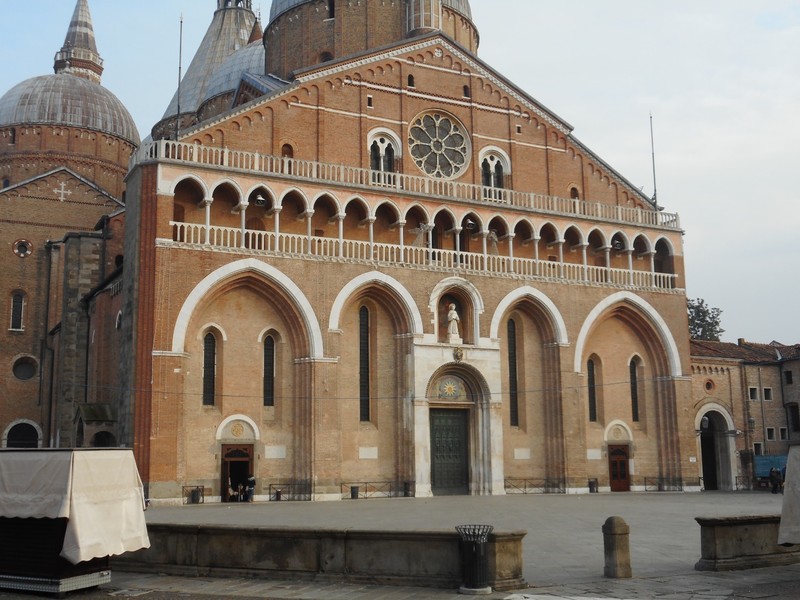 Saint Anthony Basilica is one of the highlights in Padua.

It has been an important pilgrimage destination since the thirteenth century. Its construction begun in 1232 to house the tomb of saint Anthony. It was completed in 1307.

This church is located on the site where since 110 there was a church. This was incorporated into the basilica and now it is one of the chapels; the Chapel of the Black Madonna (Madonna Nera). 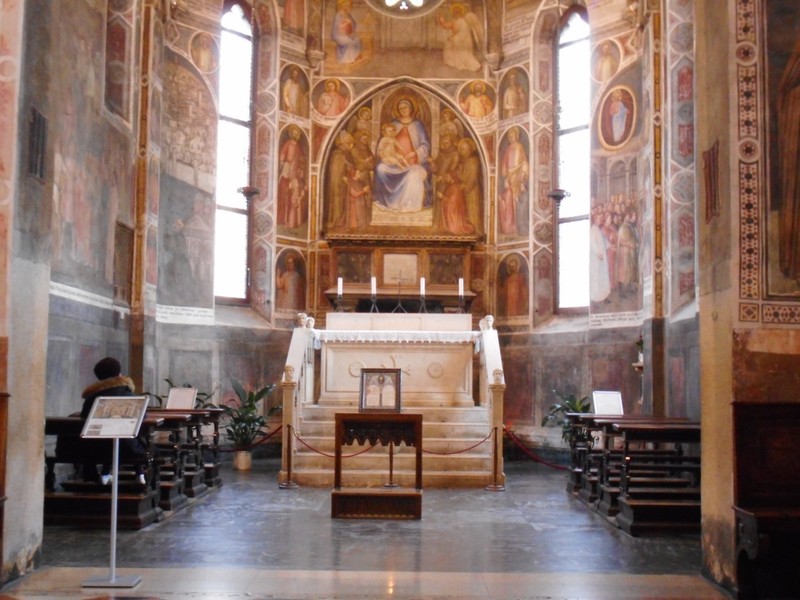 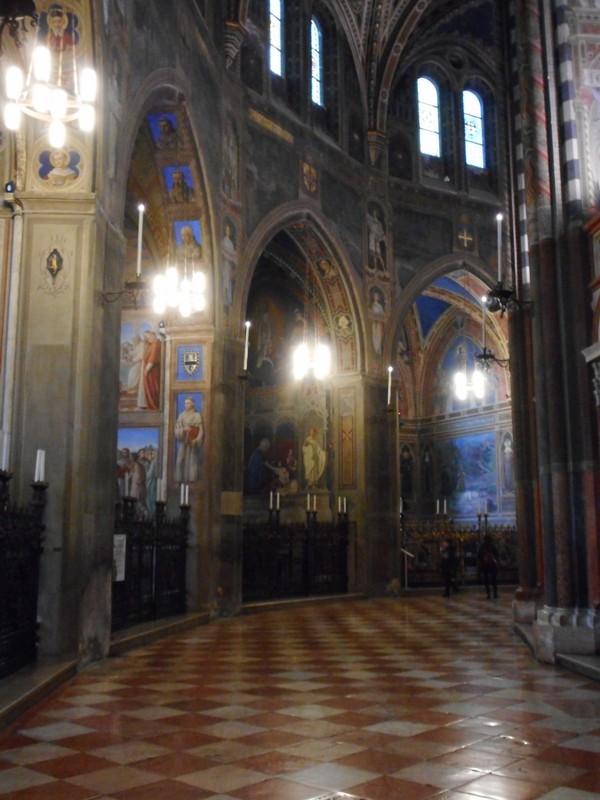 Beside this chapel there are several other ones. One of these; the Chapel of Treasure, houses some body remains of saint Anthony. Its tongue, the vocal chords and jawbone. The Cappella dell' Arca hosts the the saint' s body. The basilica is not the city' s cathedral. 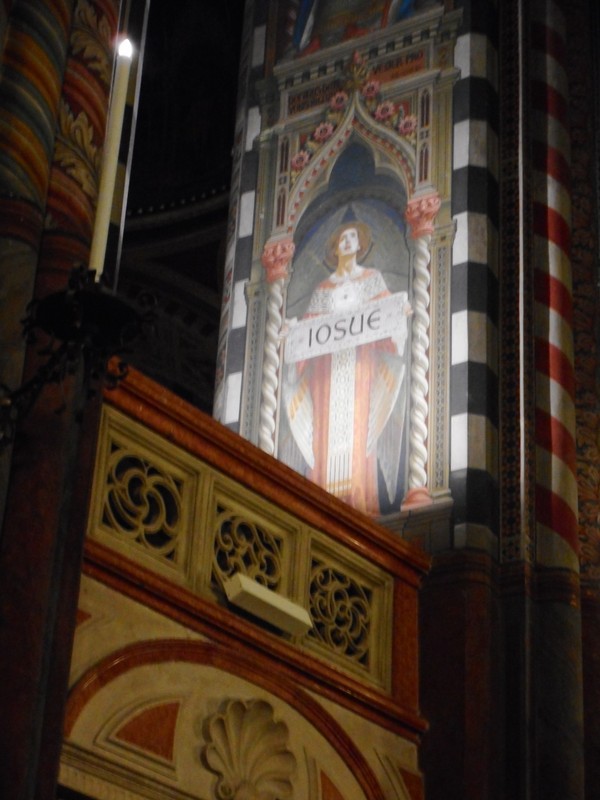 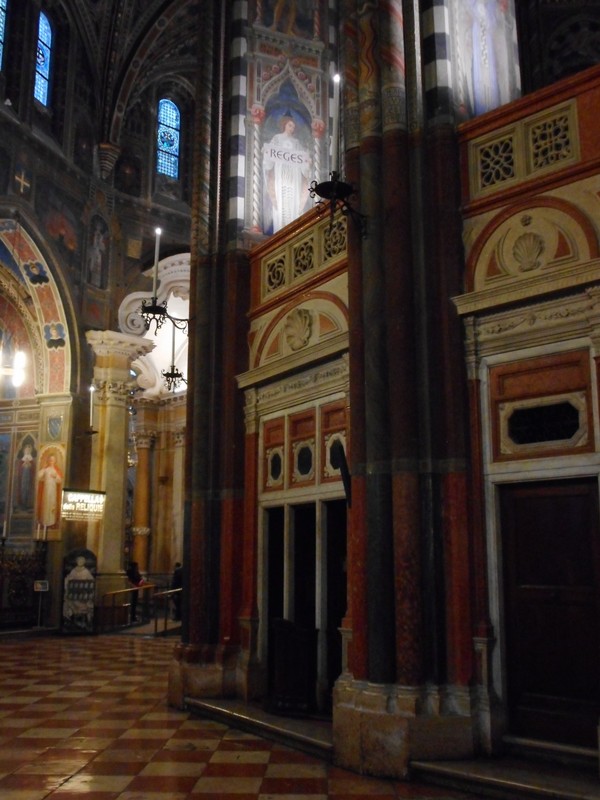 This church is huge. It has eight domes and a couple of bell towers. It is very decorated with frescoes inside. 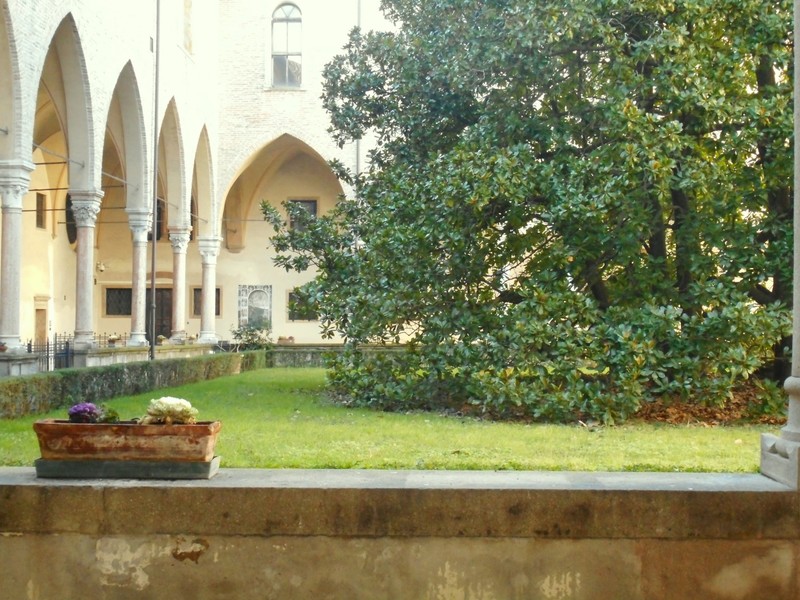 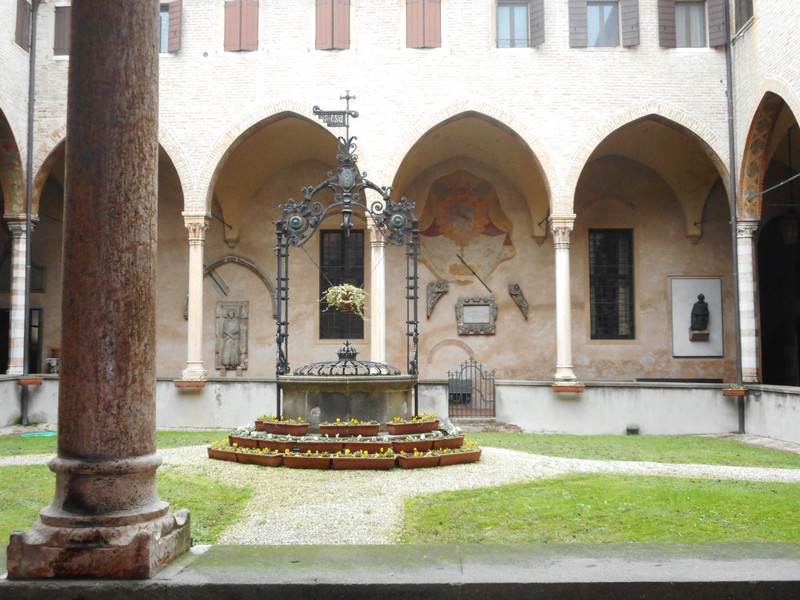 The church has four cloisters; three of them are opened to visitors. 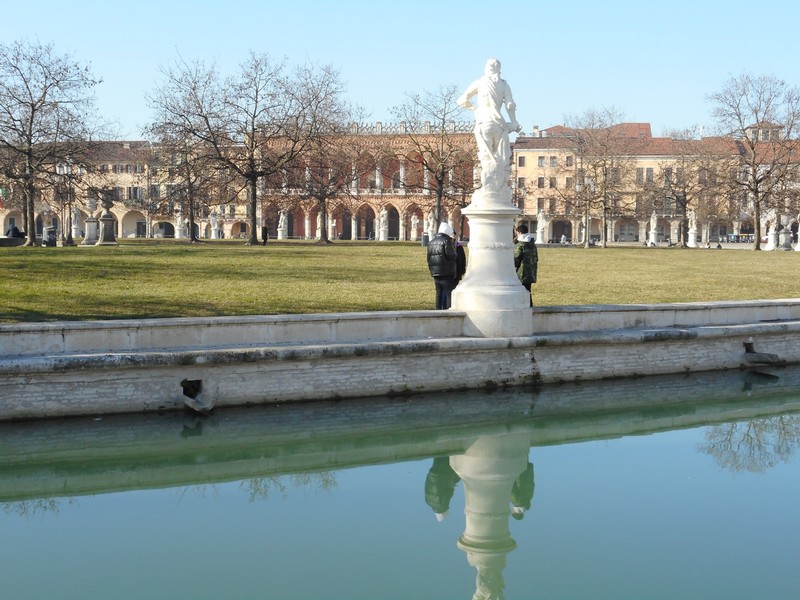 Not far from saint Anthony Basilica there is a very large square; Prato della Valle.

Prato della Valle is said to be the second largest square in the world. At its centre there is a elliptical grassy island (isola Memmia). It is surrounded by a canal crossed by four stone bridges and lined by a 78 statues representing famous people. 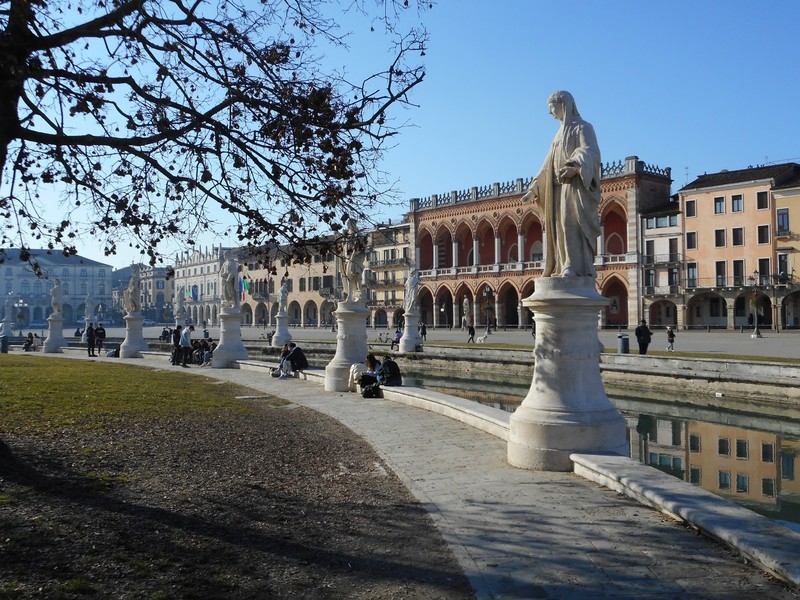 Originally this square housed a Roman theatre and later a fairground. Then it deteriorated into a swamp. In 1775 it was transformed into a 22 acre park. 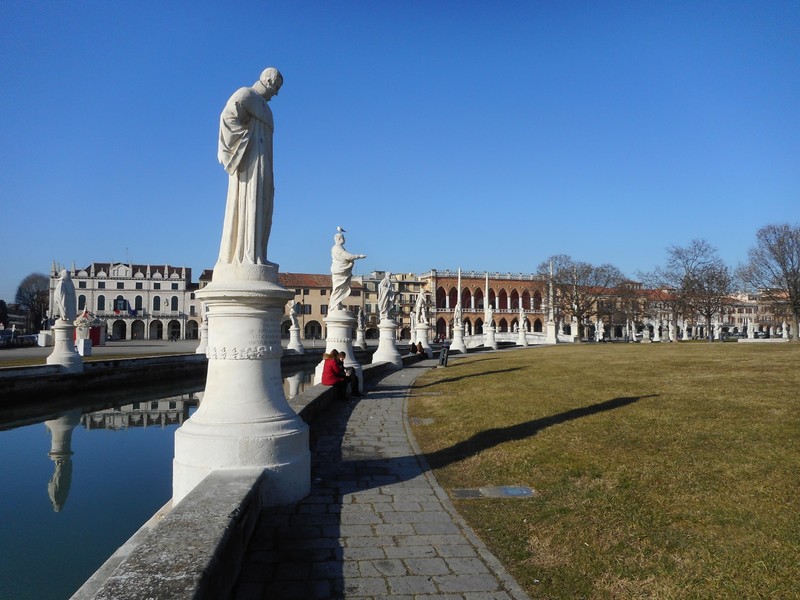 Various events are held in Prato della Valle; even a open air market every saturday. Every third sunday of the month a antiquity market is scheduled there. 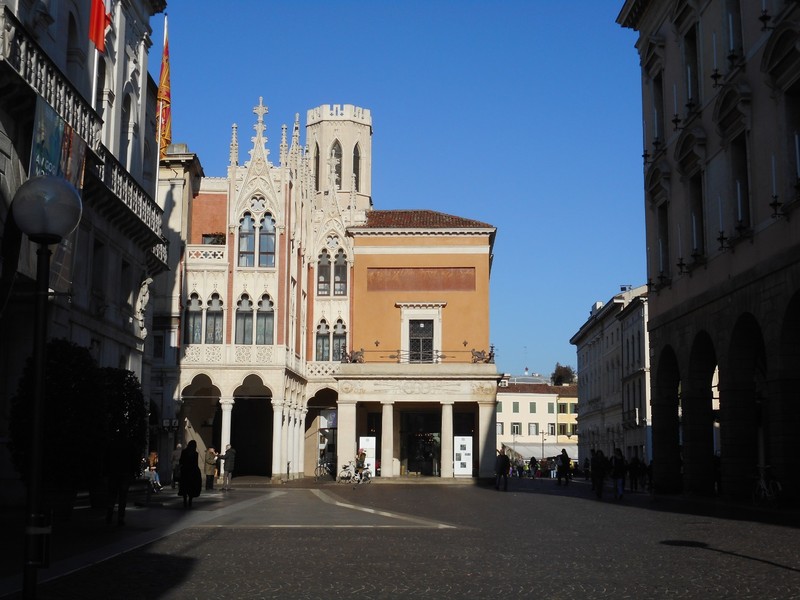 Caffe Pedrocchi is another sight to visit in Pauda.

The current building of this cafe was erected between 1826 and 1831. Some buildings were joined together to form this palace. 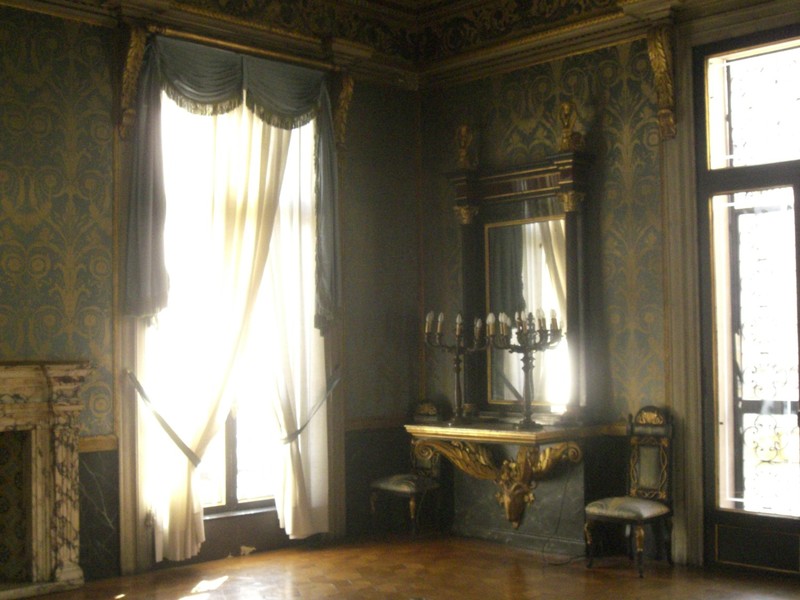 Since the beginning of the '900 and until 1916 this cafe was opened 24 hours 24. For this reason it was called cafe without doors. 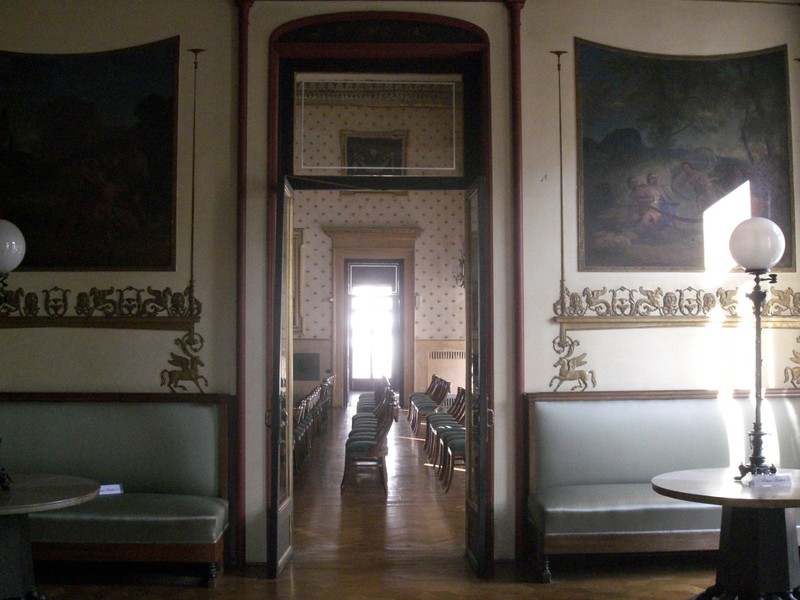 On the ground floor this building housed a cafe. On the first floor several rooms were used for reading, games, dancing and for gatherings of wealthy people.

Today these rooms are open to visitors. They have different themes; as the Etruscan Room, the Egyptian Room and so on. On the ground floor of this palace there is a luxury cafe and a restaurant. 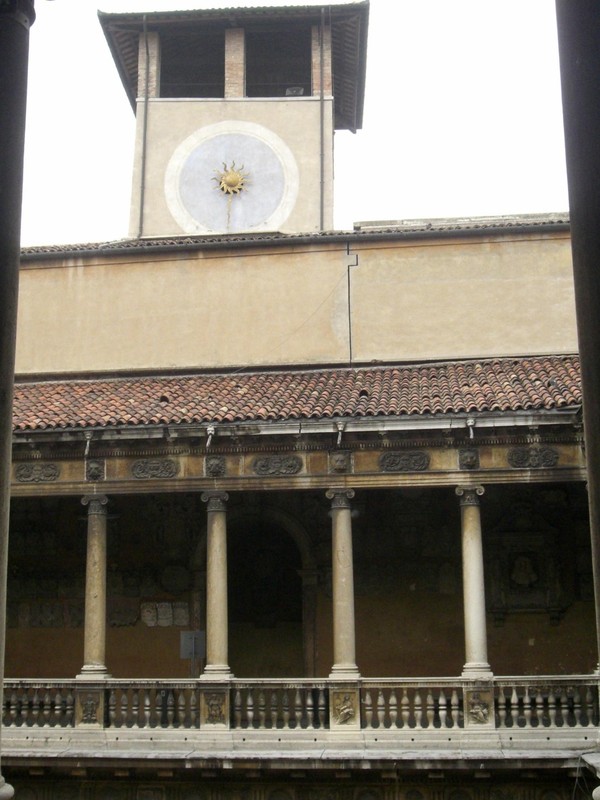 Palazzo del Bo is the seat of the ancient university. This palace was originally built joining three houses dated to the XII century. They belonged to a wealthy man who gave them to a butcher as a gift. The butcher turned the houses into an inn that had a ox skull outside as a logo. This inn was located not far from some butchers shops. The name "Bo" means ox (bue; from the Latin Bove). 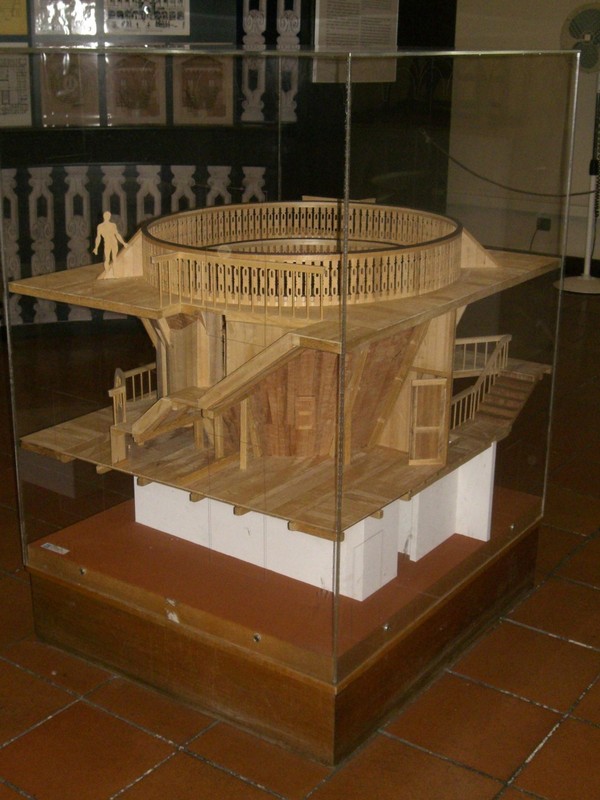 Some rooms of this palace are open to visitors but only on a guided tour. Pictures are not allowed into the palace. Inside you will see the Sala dei Quaranta with forty portaits of foreigners students and the desk from where Galileo Galilei taught mathematics and physics from 1592 to 1610. Another room to visit here is the Aula Magna. This large room is decorated with paintings and frescoes.

Another sight inside the Bo palace is a room with an anatomical theater. It was built in 1594. This structure has six balconies. Up to 300 students could stand on these to watch the teacher dissecting bodies.

In this picture you can see a model of the anatomical theater. 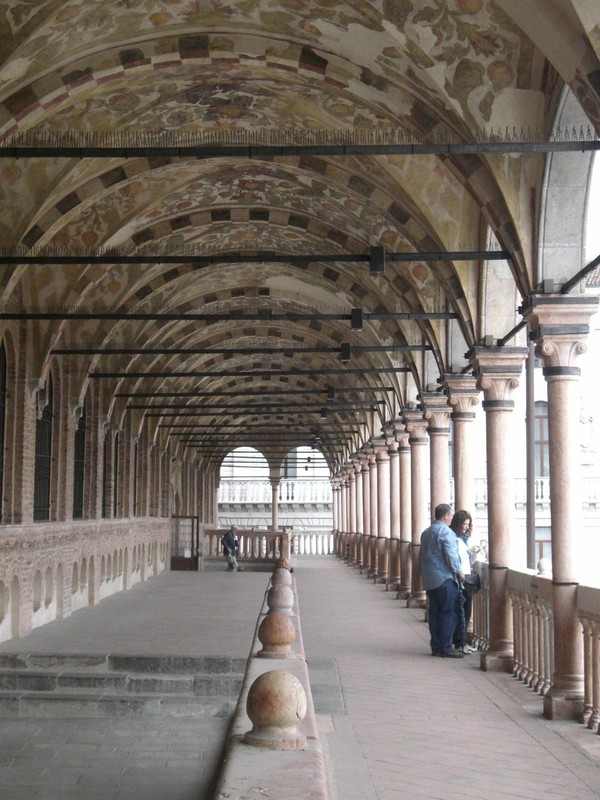 Palazzo della Ragione is a large palace built between 1172 and 1218 to serve as law court and city council chamber. What we see today dates from 1306 to 1309.

Inside this building there is an enormous hall on the upper floor decorated with frescoes depicting astrological and religious themes. This hall is called " il Salone".

This hall is 82 meters long and 27 meters wide. It was painted with a cycle of frescoes by Giotto. In 1420 it was destroyed by a fire. Then it was rebuilt and turned into a single room. Originally the Salone was made of three rooms.

In 1756 a whirlwind damaged the frescoes and torn away the roof almost completely. The palace was restored again.

Inside this palace you can see also a big wooden horse built in 1466 and a stone called Pietra del Vituperio. Insolvent debtors had to sit on it in underwear three times before beign exiled. They had to say "cedo bonis" (I give away everything). If they dared to go back to Padua and they were caught they had to suffer the same retribution and three buckets of water were poured on their heads.

Under this building there is a market with lots of stalls where you can buy bread, pasta, meat, cheeses and other food. This area is called Sotto il Salone.

I didn' t take any pictures inside the palace because it was too dark. In this picture you see part of the open loggia of the palace. 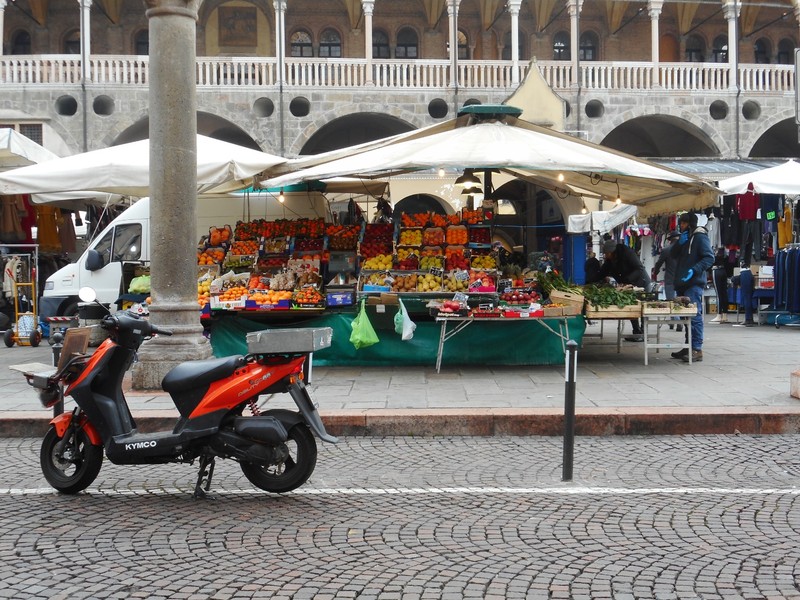 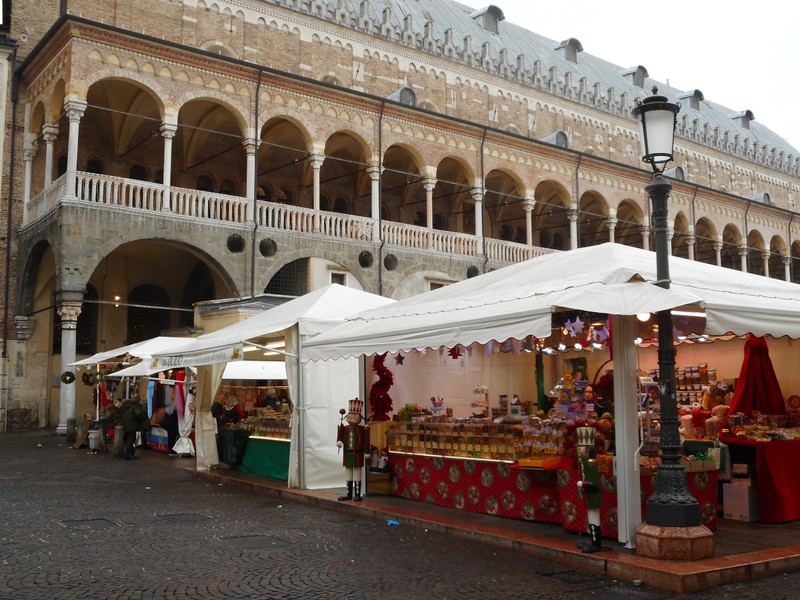 At piazza delle Erbe a daily market is scheduled every day except on sundays. This market is mostly about fruits, vegetables and flowers.

At piazza della Frutta you can find a market as well, but here they sell clothes, bags and accessories. There are also some stalls offering fruits and vegetables too, but not many. This market operates as the one at piazza delle Erbe.

These pictures were taken at piazza delle Erbe. 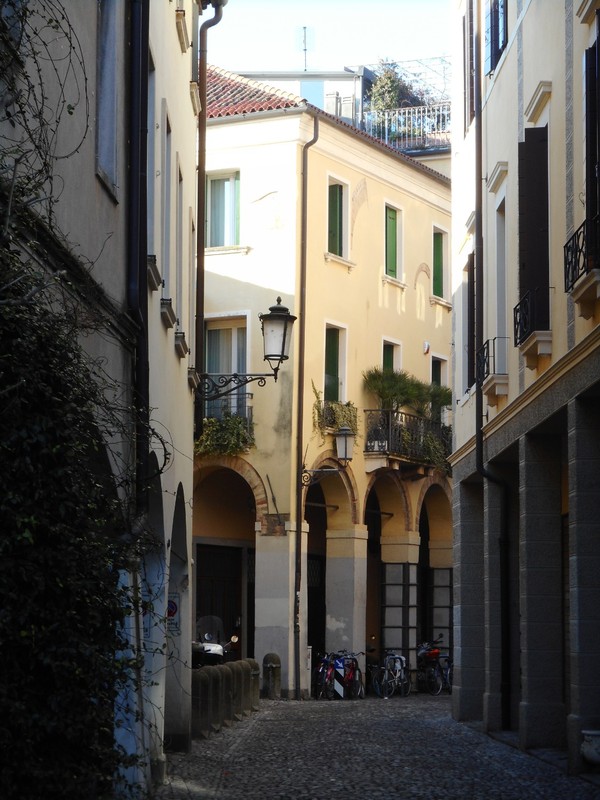 As in Venice there is a Jewish Ghetto in Padua as well. It is practically a maze of narrow streets to the south of piazza delle Erbe. In this area the Jewish people were forced to live and work from 1603 to 1797. They could not leave it from 2 a. m. 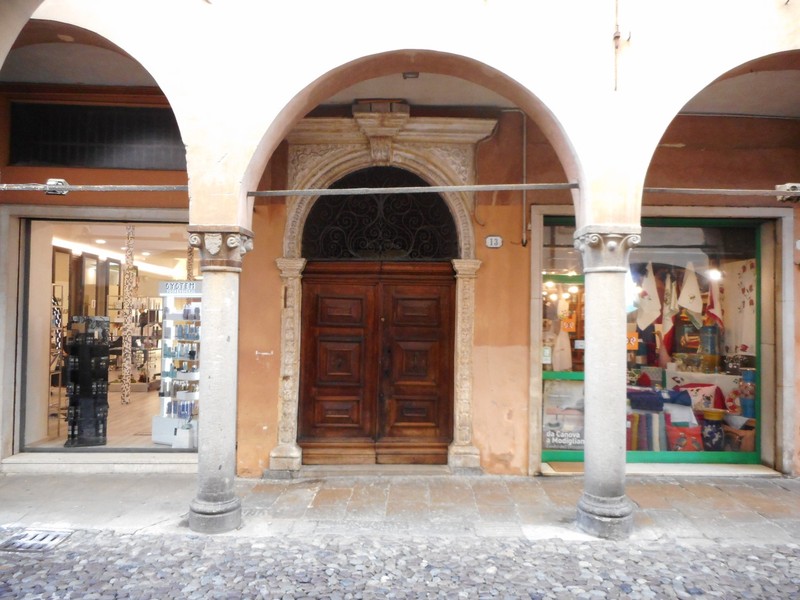 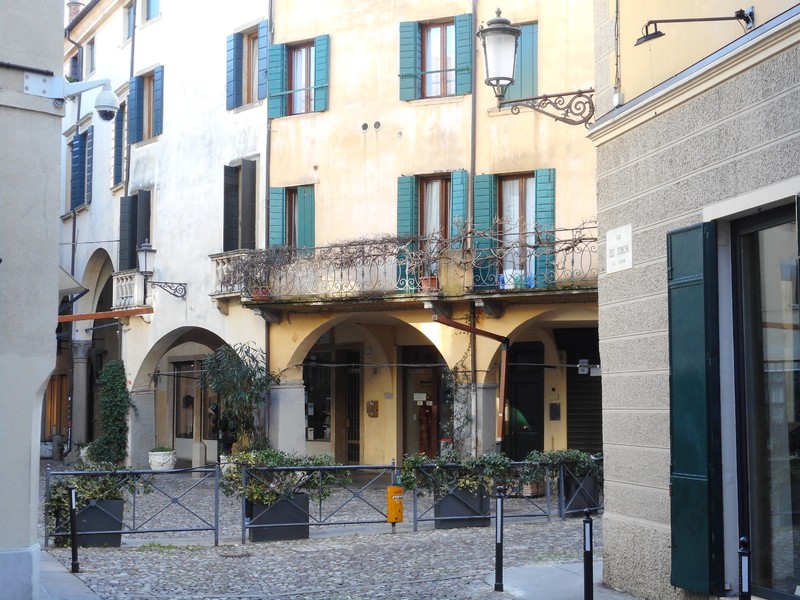 This area was closed by four gates controlled by two guardians; one Jewish and another Christian. 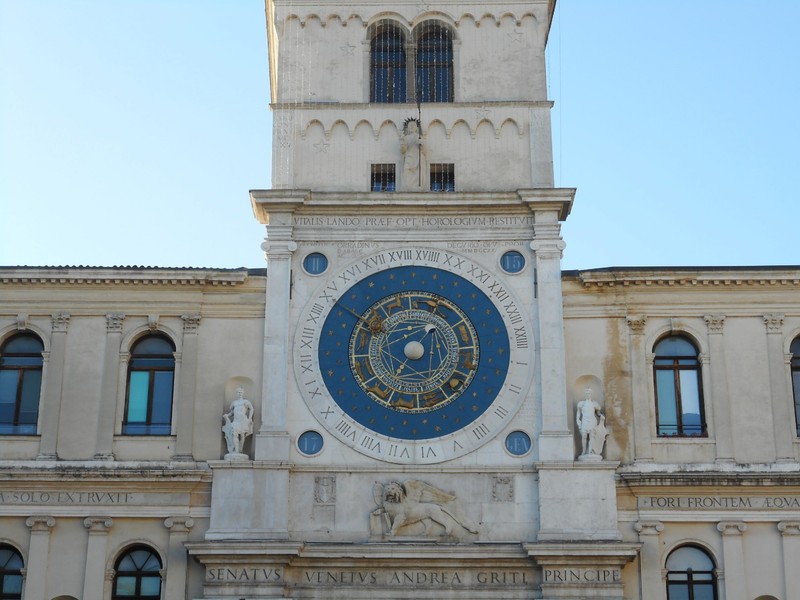 Piazza dei Signori is a square situated some meters far from piazza delle Erbe and piazza della Frutta. Here the Palazzo della Signoria was situated. It was property of the Carraresi family; the lords of Padua from 1318 to 1405.

One of the palaces on this square is the Palazzo del Capitanio. This palace was the residence of the Venetian authority when Padua was under control of Venice.

This palace has a tower with a astronomical clock; originally buit in 1344 and rebuilt in 1477. Beside the palace you see the 14th century Loggia del Consiglio. It served as meeting place for the town's council.

Opposite the Palazzo del Capitano the church of saint Clemente is situated. It was built in 1190.

At piazza dei Signori there is a daily market as well (except on sundays). So it was difficult for me to take a decent picture due to the aboundance of stalls. 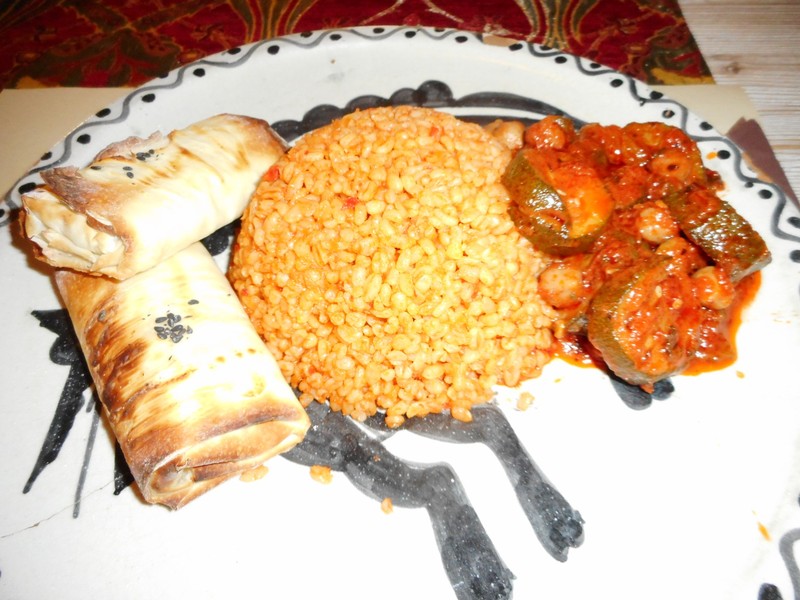 Peace 'N Spice is a restaurants owned by some people coming from various Asian countries. Here they serve typical dishes from Lebanon, Syria, Pakistan and from other countries. I had lunch here twice. The food was good. I strongly recommend this restaurant.

Here, at lunch you can choose three or five dishes and a small drink for ten or for fifteen euros.

This restaurant is situated near piazza Capitaniato; at via Dondi dall' Orologio. To get there you can cross the torre del Orologio ' s portico and you are at piazza Capitaniato. Walk straight to the end of this square and you will find it on your right under some porticoes. 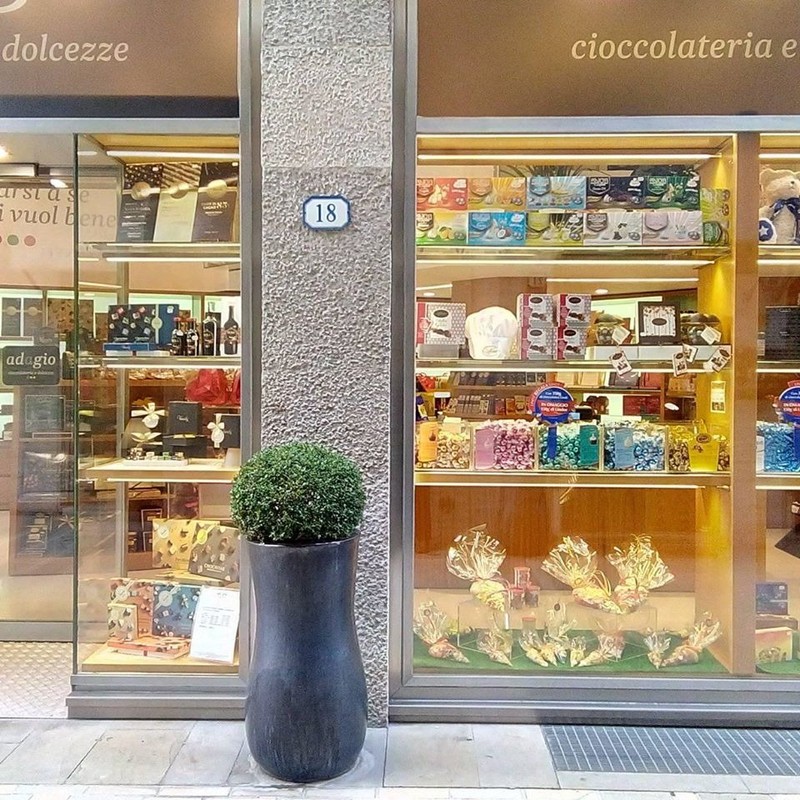 Adagio is a small and beautiful shops located in via Caterino Davila at number 18. It is not far from Caffe Pedrocchi.

Here they sell chocolates and various kinds of sweet treats. Adagio is a good place to buy some presents in my opinion. 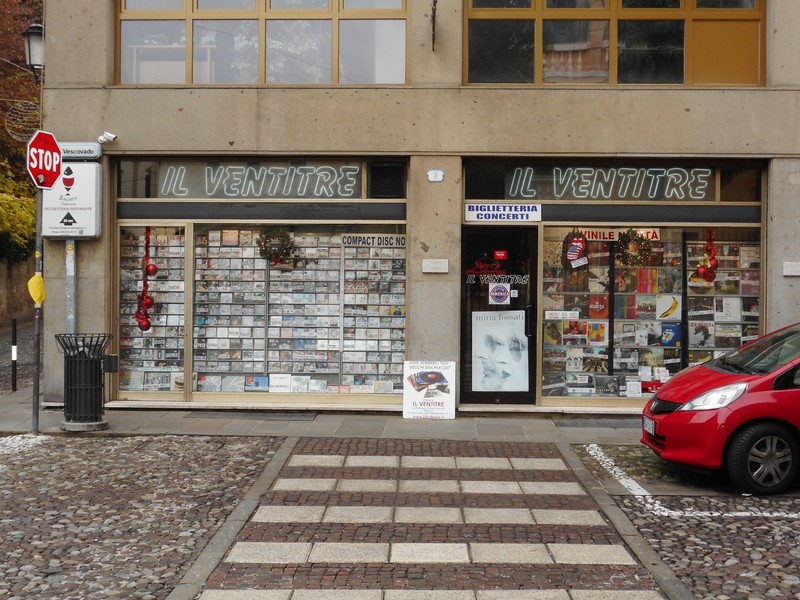 Il 23 is one of the oldest record stores in Padova.

It is not a large shop but here you will find a large selection of compact dics and long playings; both new and used. There are also dvds, music cassettes and other items related to music at Il 23.

I never miss a visit to Il 23 when I visit Padova.

You can spot this shop from afar, because its windows are almost covered with records covers. 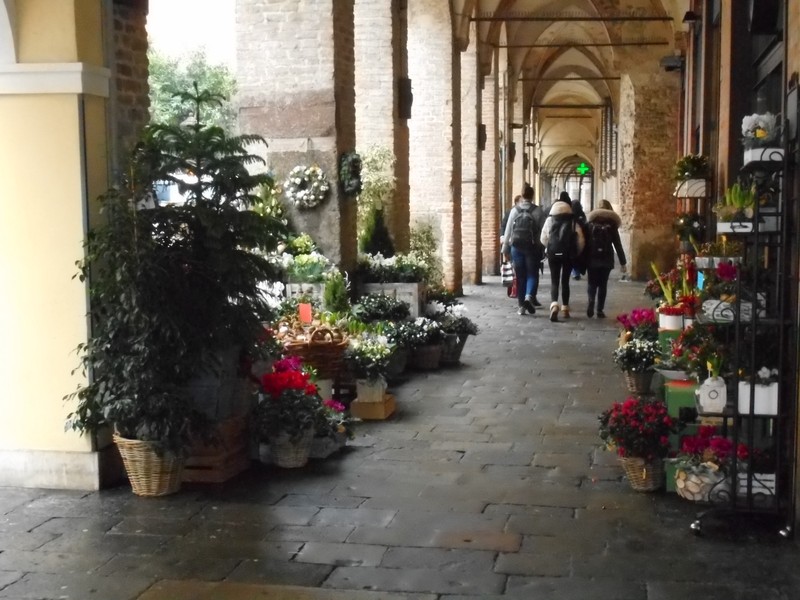 As in Bologna, there is a long network of porticoes in Padua. 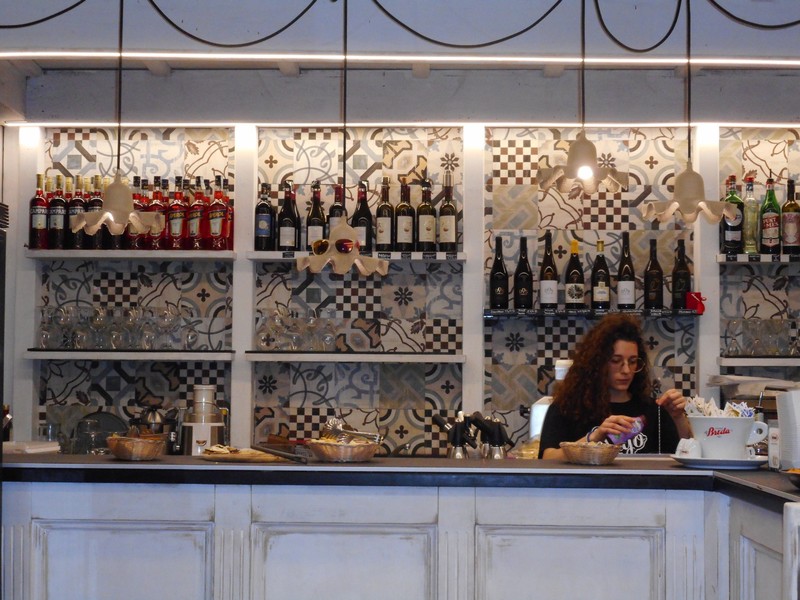 Sugo is a cafe not far from the saint Anthony Basilica. It is a good place to have dinner. Well; I' d recommend to visit Sugo for the happy hour. 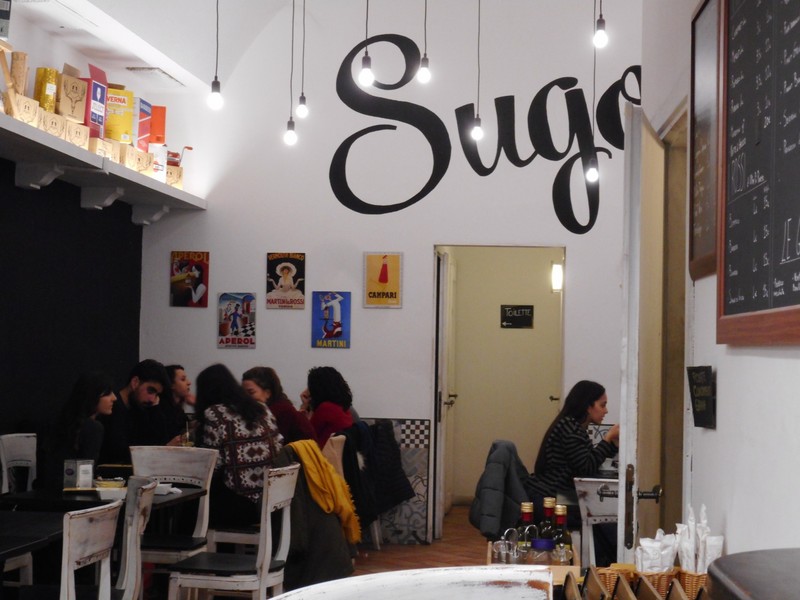 The happy hour is a period of time; usually from 6 p. m. when you order a drink and you can help yourself with nibbles from the counter of a bar or a cafe.

At Sugo they usually have good nibbles for the happy hour; as pasta (noodles), small sandwiches, fries and other kinds of food. I usually had a not alcoholic cocktail made with apricot and juices at Sugo. I liked it a lot.