My second holiday in Santorini.

Santorini or Thera is an island in the southern Aegean sea. It is part of the Cycladic Islands.

A couple of years ago, circa I went back to Santorini after many years.

The first time I visited Santorini I booked my room in Fira. This village is the capital of the island. It is a very touristy place. There are some museums and a couple of churches worth a visit there. 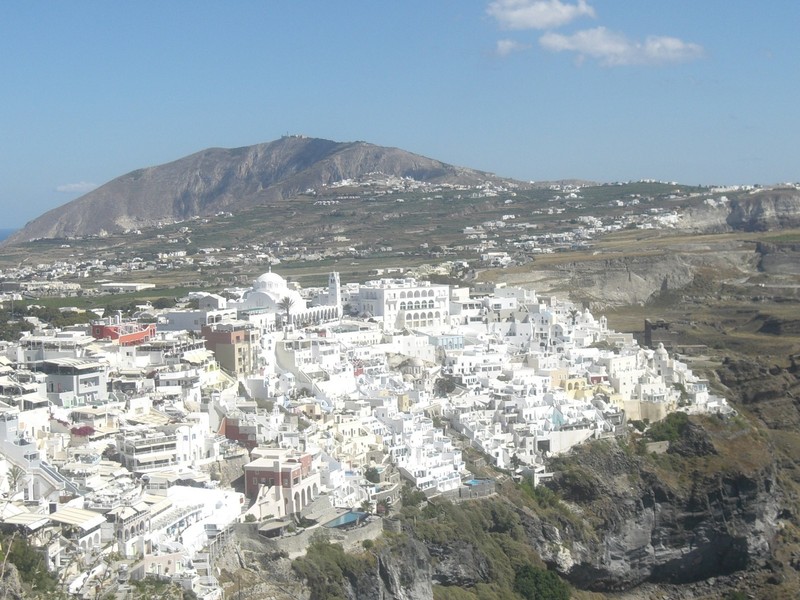 On my first holiday on the island one of the things I liked to do (usually in the evenings) was a long stroll from Fira to Imerovigli. I did the same stroll also on this holiday. 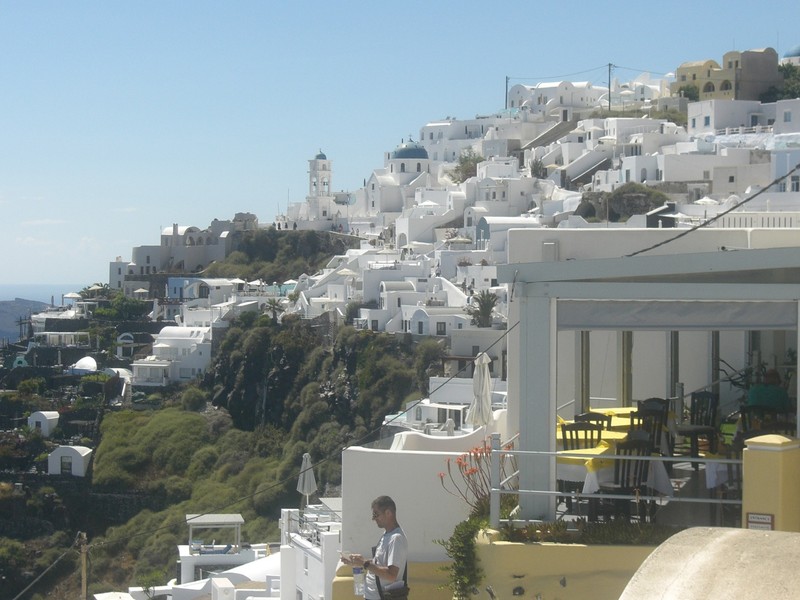 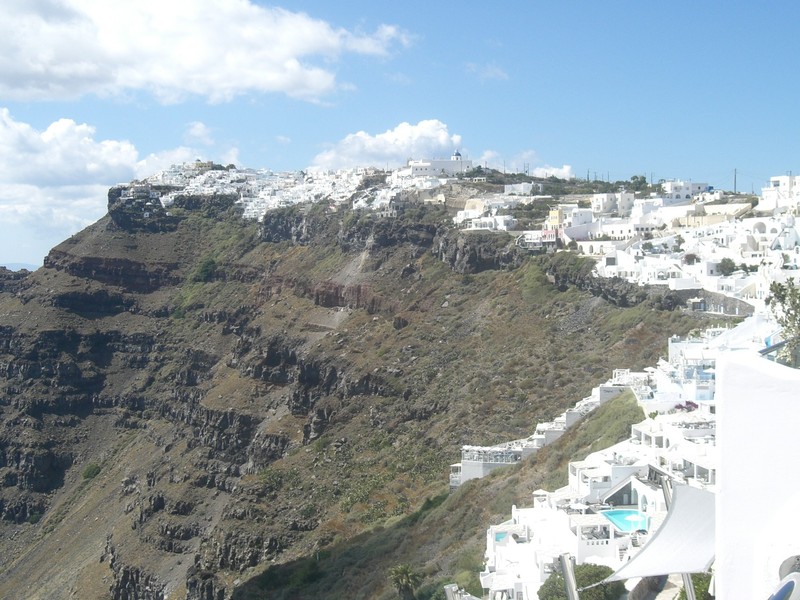 I took these three picture during one of these strolls on my last holiday in Santorini. 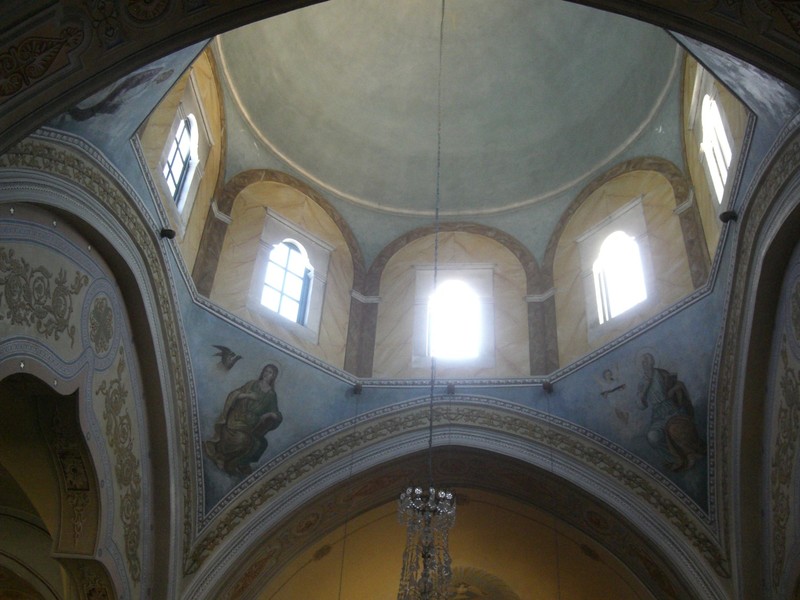 The Saint John the Baptist Cathedral in Fira was built in 1823. It was restored and rebuilt in 1970 after the earthquake of 1956. It is really a beautiful church. 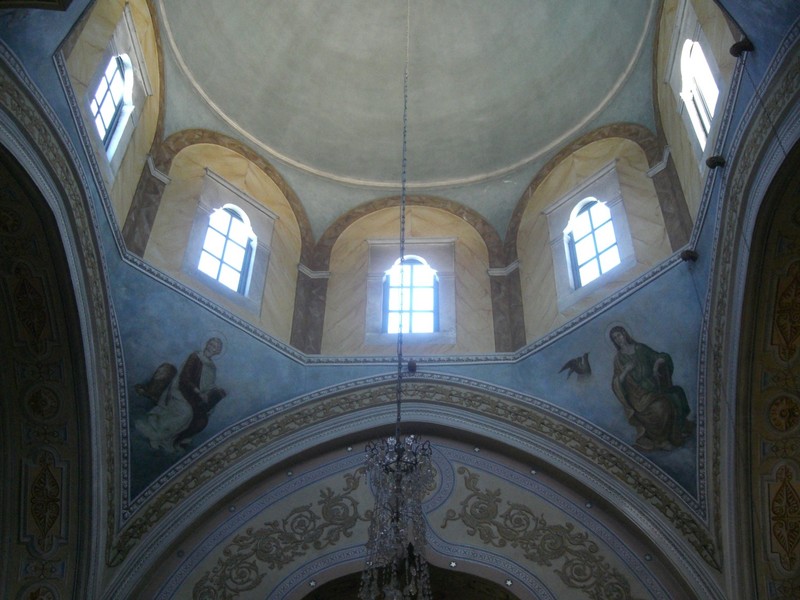 Here you see another picture taken into the catholic cathedral. 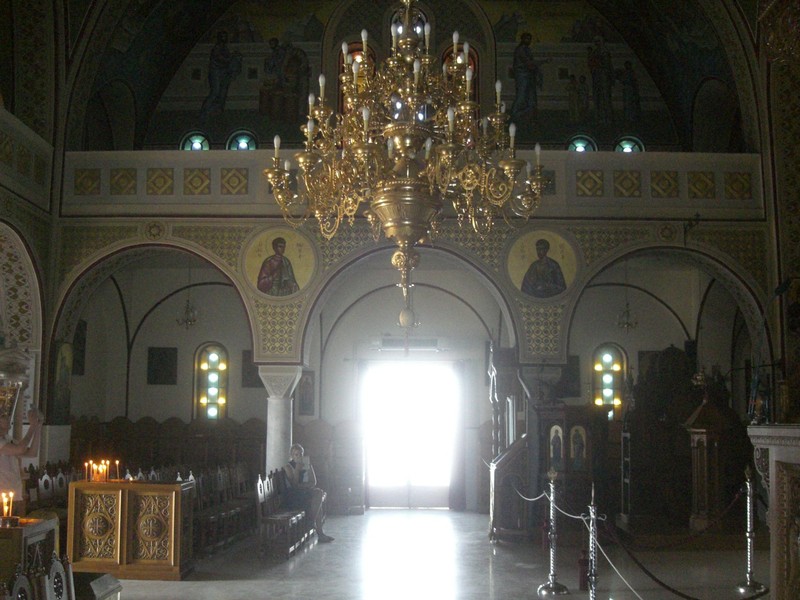 Another church worth da visit, or maybe more is the Ortodox Metropolitan Cathedral. It was built in 1827. It was damaged during the 1956 eartquake. It was then renovated. 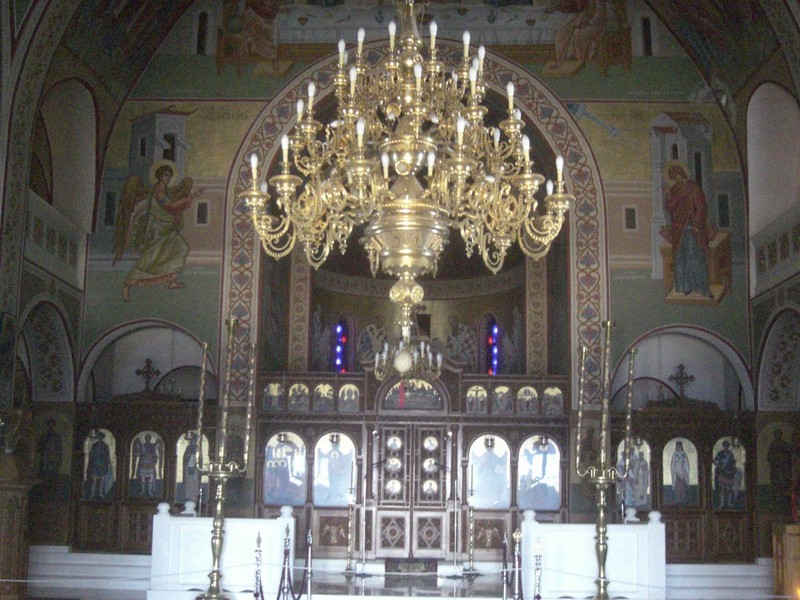 Another picture taken inside this church. 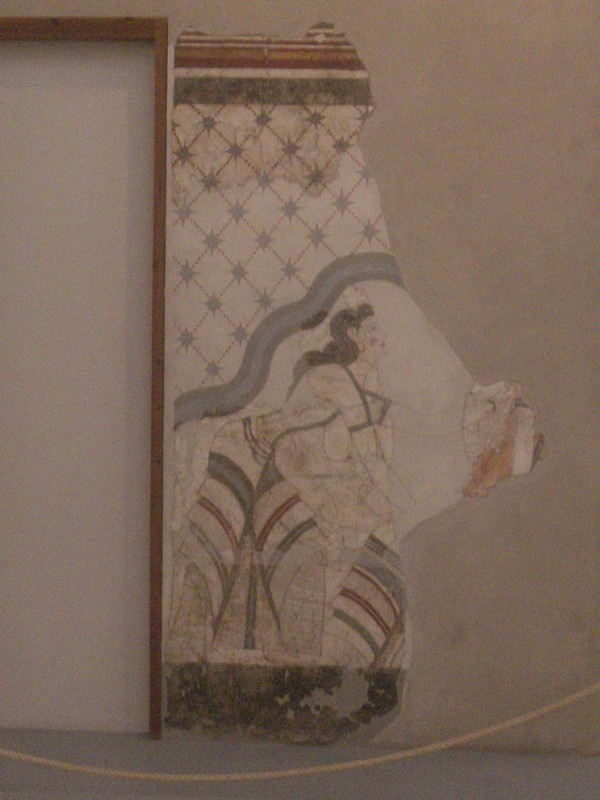 There are some museums in Fira. One of these is the Museum of Prehistoric Thira. I had visited it on my first viit to Santorini and I re visited it on this holiday. 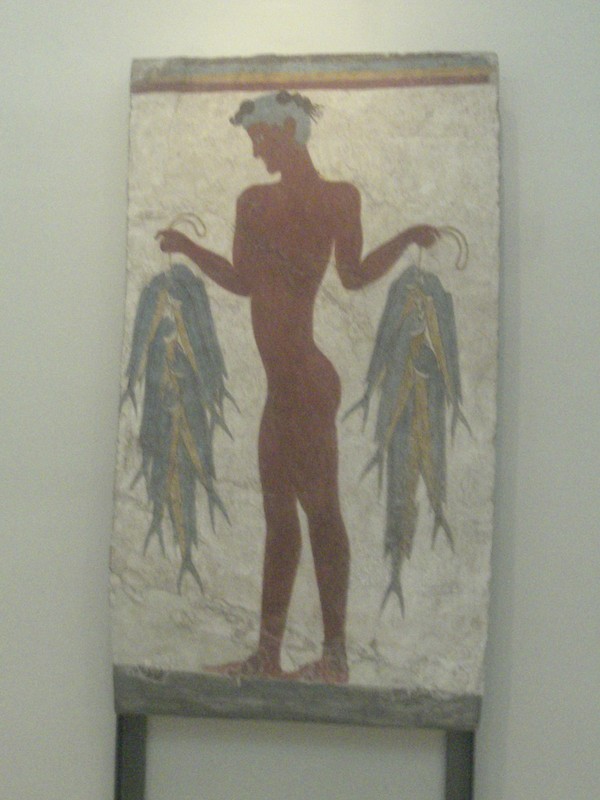 This museum houses a large collection of ancient finds as vases, weapons, jewels and fossil plants. These were discovered in Akrotiri, Potamos and other places on the island. 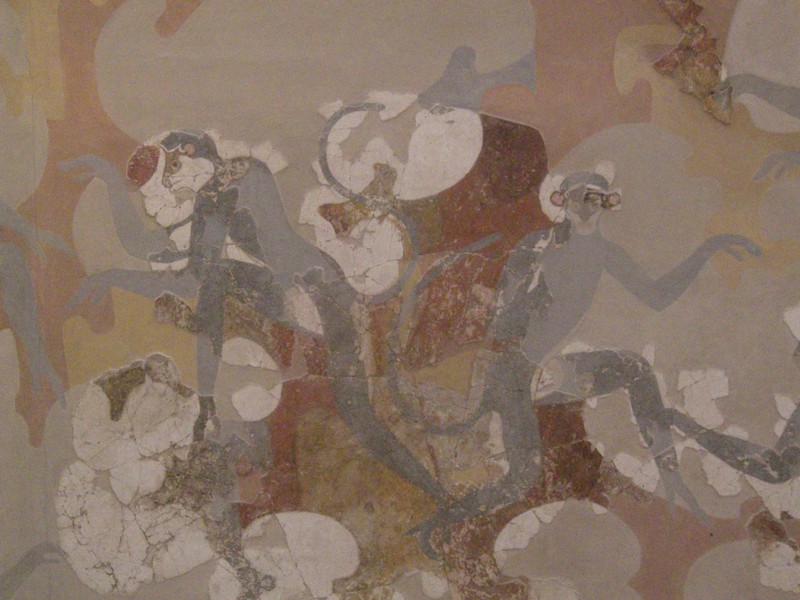 The highlight of the museum are the fragments of wall frescoes found in Akrotiri. They decpict various subjects as women, azure monkeys and naked fishermen.

As you can see these frescoes are well preserved despite of their old age. 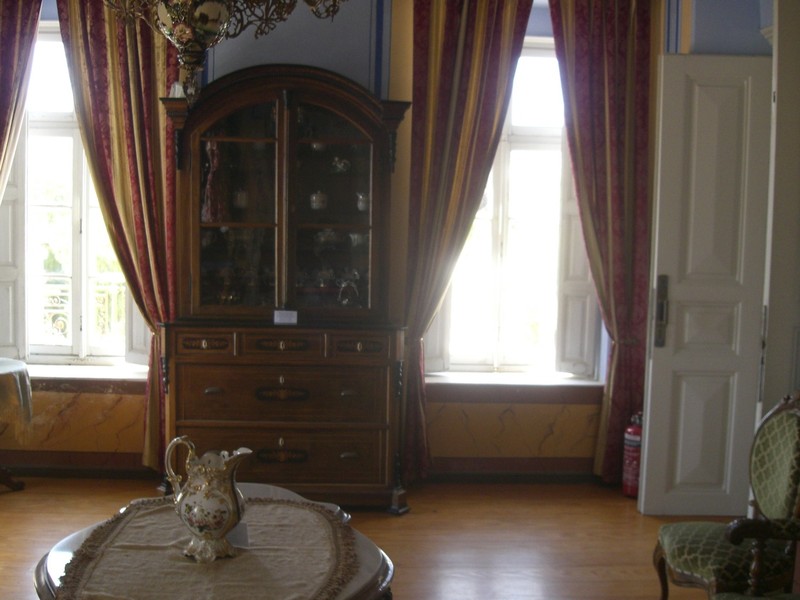 The Argyros Mansion is a beautiful mansion worth a visit. It is located in Messaria. This villa belonged to Emmanuel Argyros; a trader of local wine. It was built in 1888. In 1956 it was partly destroyed by the earthquake. After more than 30 years it was restored and turned into a museum. 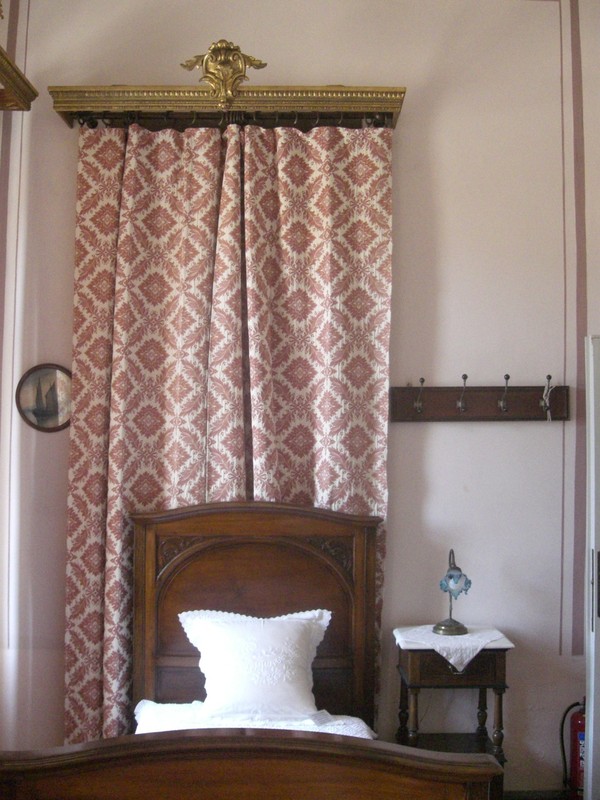 Inside this mansion you can see furniture and items from the 19th century. 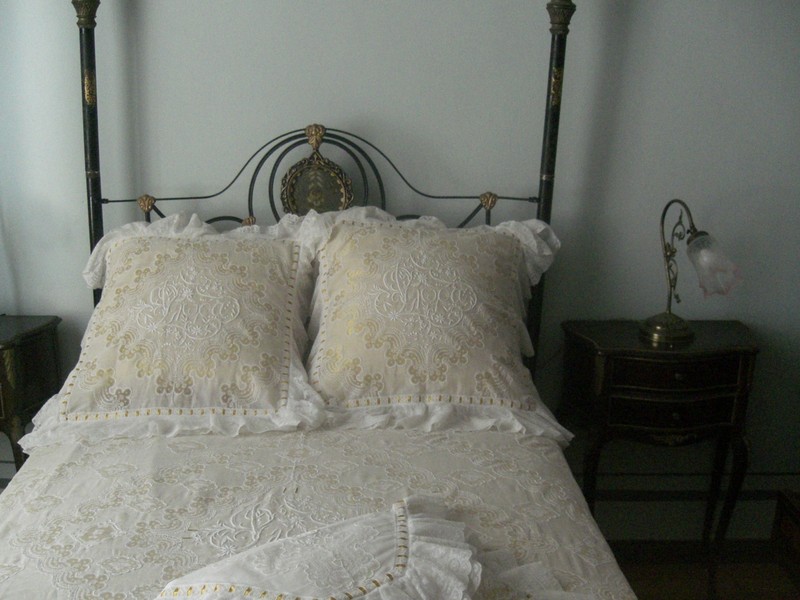 During the guided tour (you are not allowed to visit the villa on you own) you will be showed the living room; a small music room. The dining room; the owner' s office and three bedrooms. 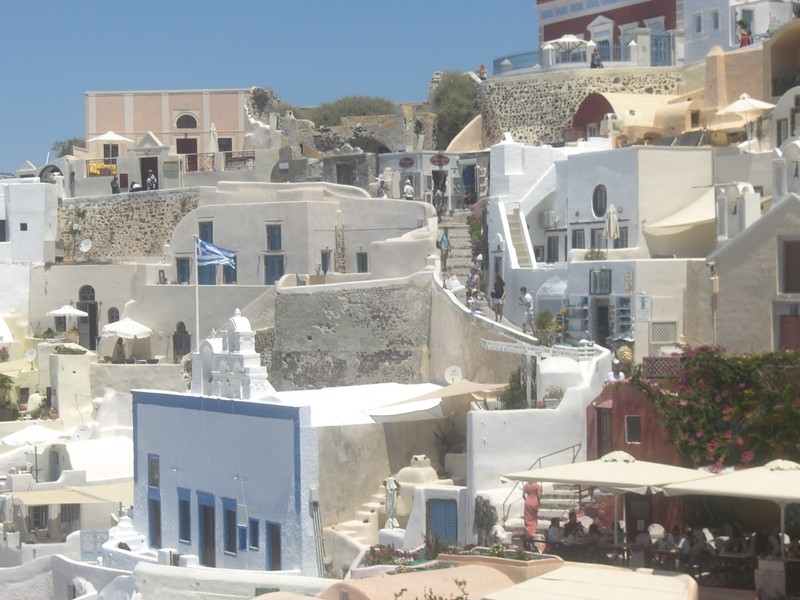 Oia, also called Ia, is one of the most popular destinations in Santorini.This is the most famous place to enjoy the sunset (a "must do thing" on the island). 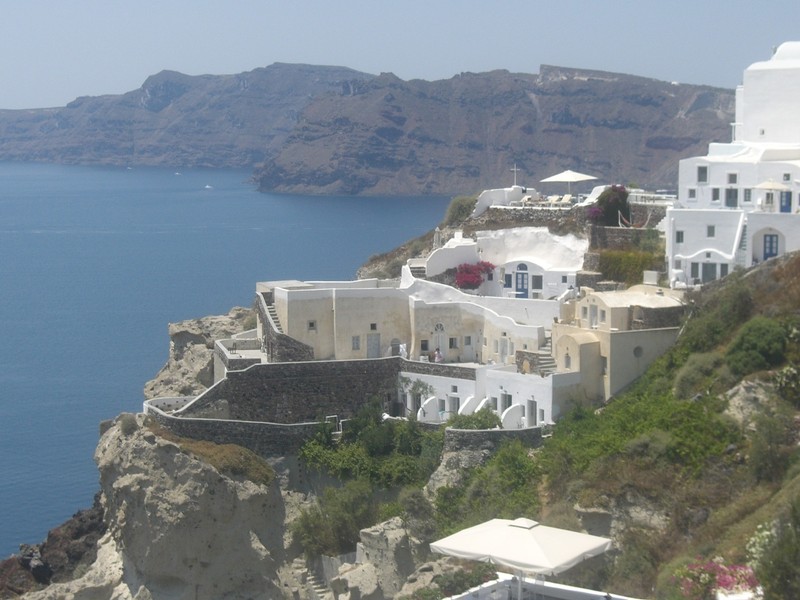 Oia is situated on the northernmost area of the island. It is 11 kilometers far form Fira.

There are practically two streets in this village. One of these is long and marble paved, 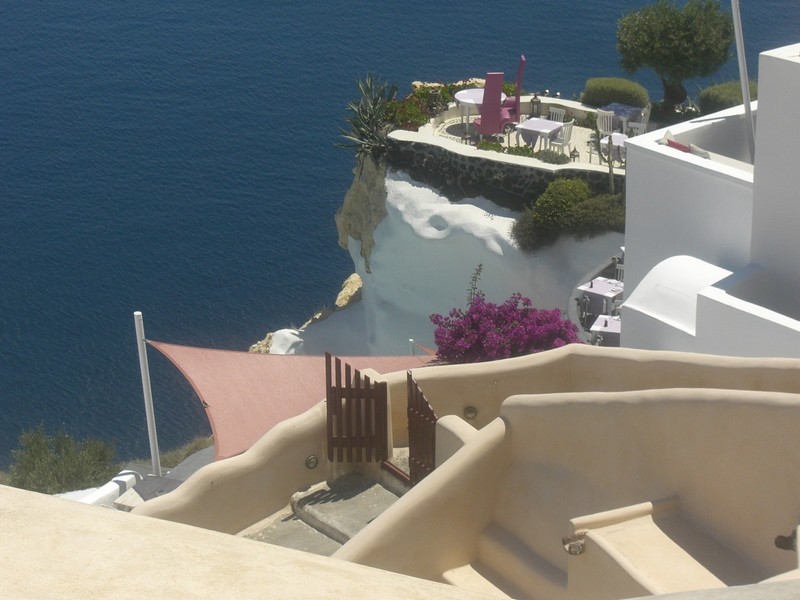 There are lots of rock hewn houses and also captain' s buildings in Oia. These are now used as cafes, restaurants and shops.

Oia has several churches and a naval museum.

Part of Oia was rebuilt in a few years after the 1956 earthquake. 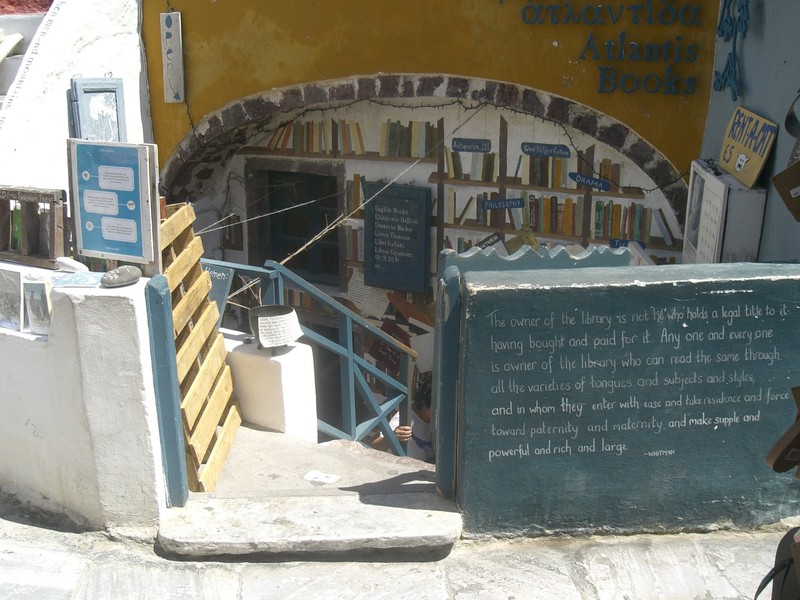 There is a popular bookshop in Oia. Its name is Atlantis Books, It was first opened in 2004. It was moved from 2005 in the building where it stands today. 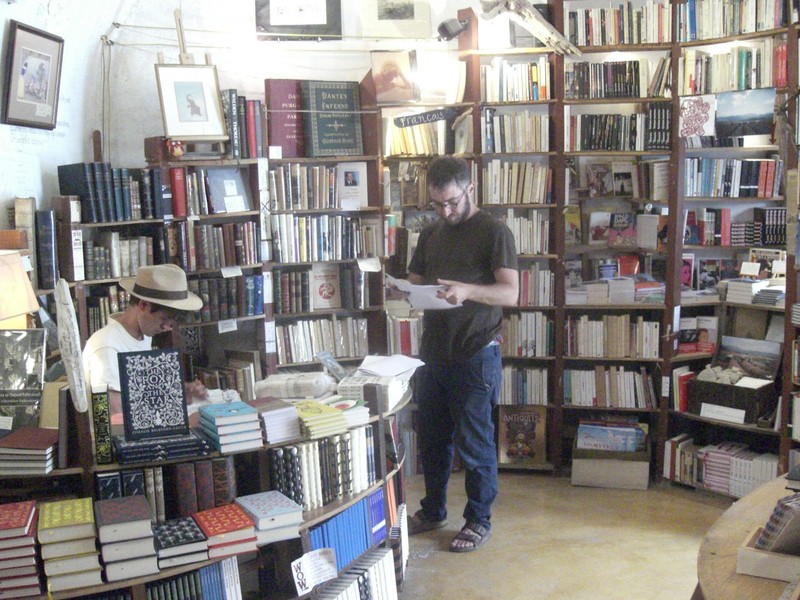 This bookshop is quite small, but full of various kinds of book. Here you can find a good choice of English language books about Greek culture and history. At Atlantis Books they also sell rare first editions books and books in foreign languages. 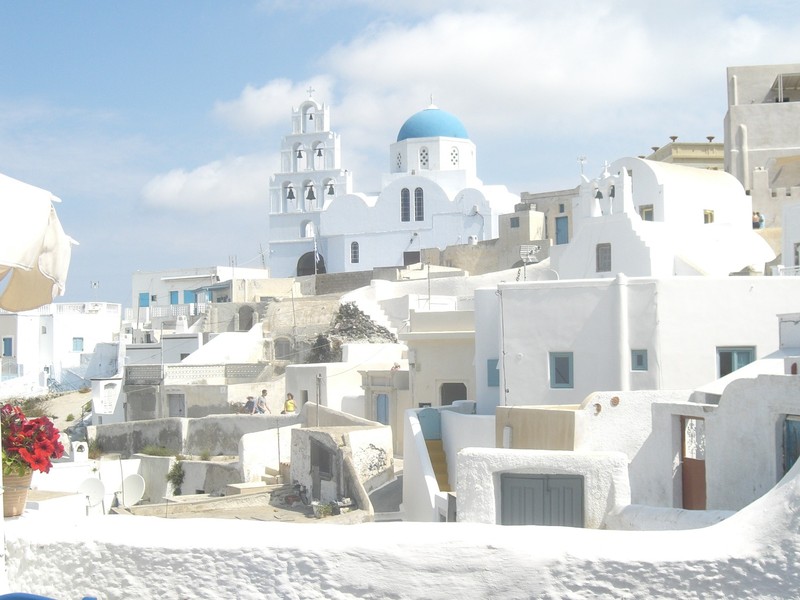 Pyrgos is another village worth a visit in Santorini. It is situated around 7. 5 kilometers south east of Fira. It was built amphitheatrically on a hill, at the foot of Profitis Elias mountain. 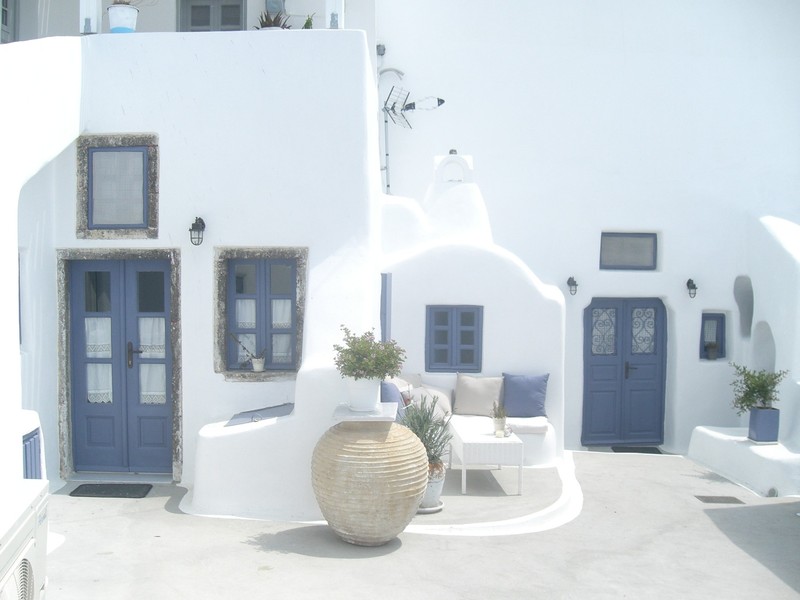 One of the main sights in Pyrgos is the Kasteli. It is a fortress built arouns 1580 by the Venetians to defend the inhabitants from the invaders. There is a cafe restaurants inside the fortress. 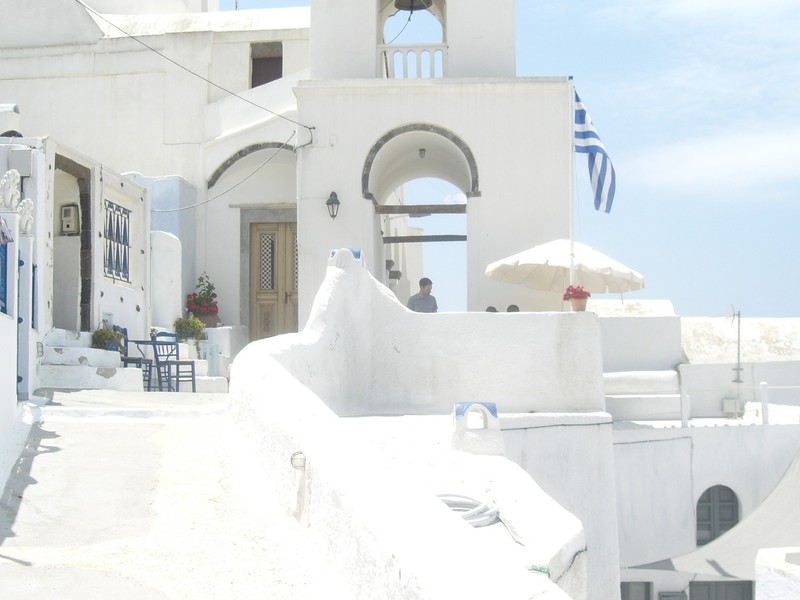 There are lots of typical cave houses in Pyrgos as well. 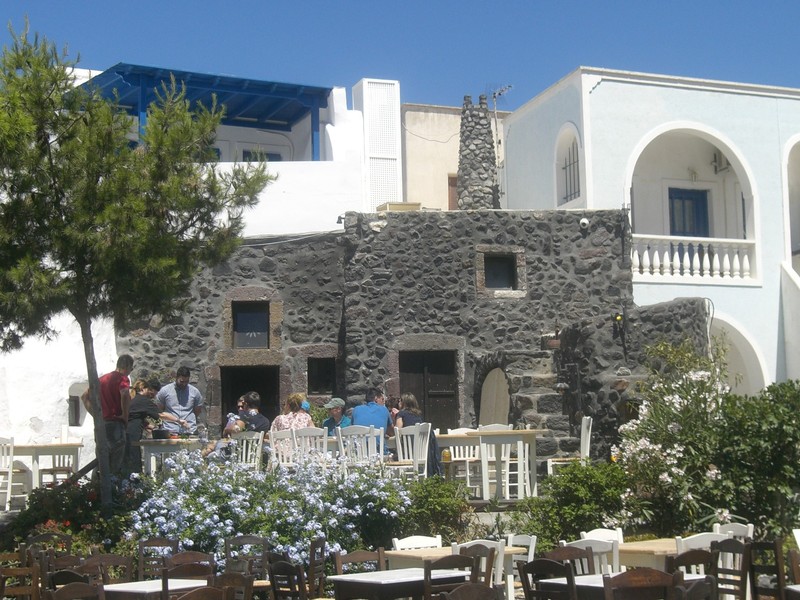 Megalochori is a nice village where you will not find many tourists. There are not lots of shops and eateries there, but there are some hotels in case you' like to look for you accomodation in a quiet village. 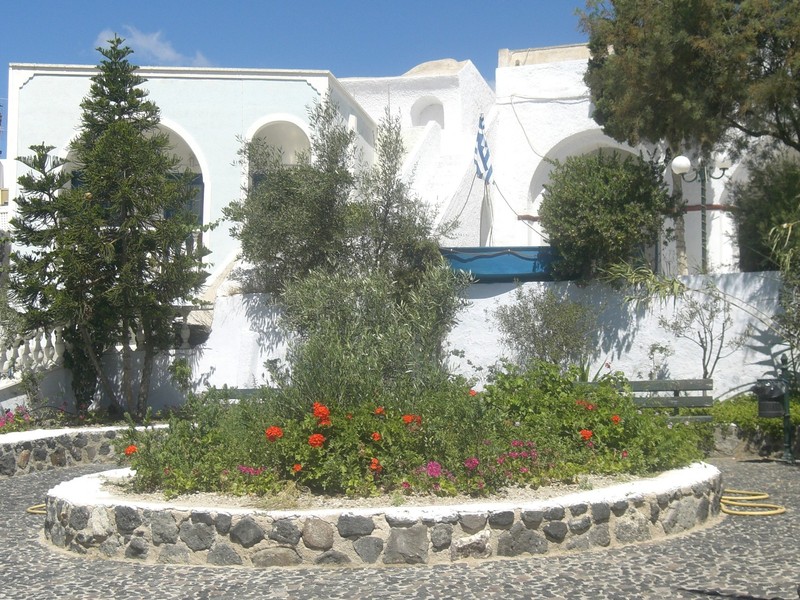 Here you see part of the main square in Megalochori. 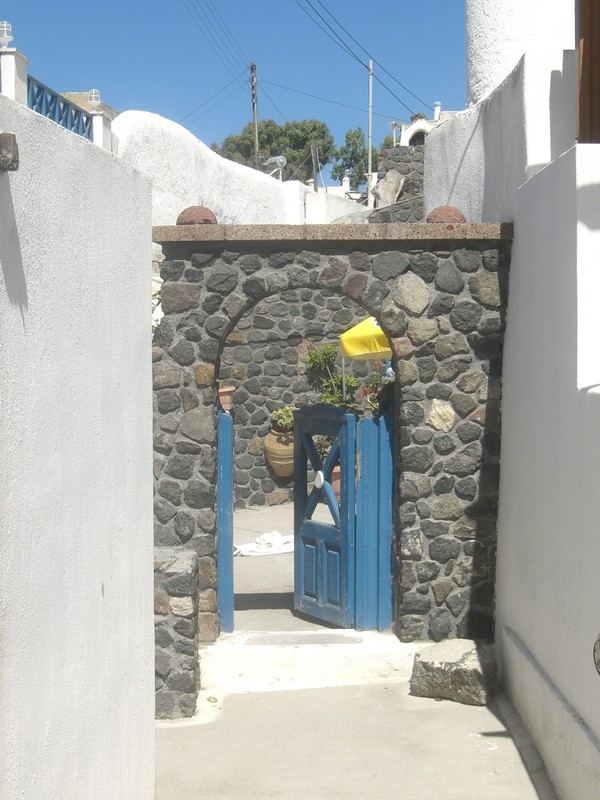 There is a lot of typical cave houses, a maze of streets and stairs in Megalochori, as in other villages on the island. 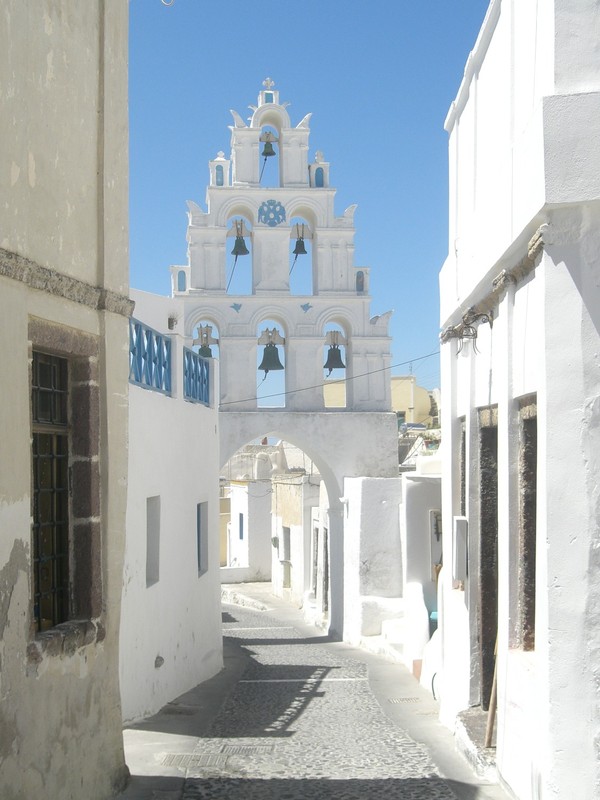 A nice spot in Megalochori. 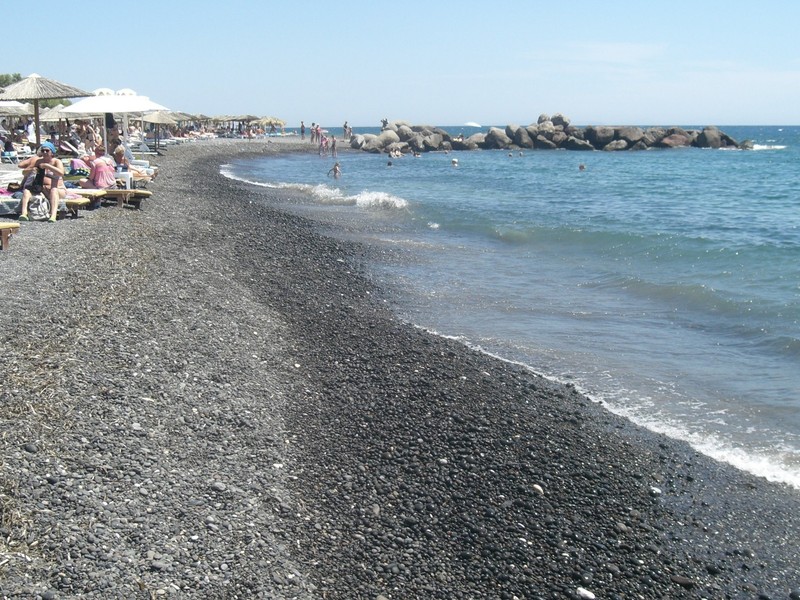 Most of the beaches in Santorini are made of black sand and peebles. I have been to two of these on this holiday. I went at the beaches in Kamari and Perissa. I booked a room in Perissa.

On this picture you see part of the beach in Kamari. 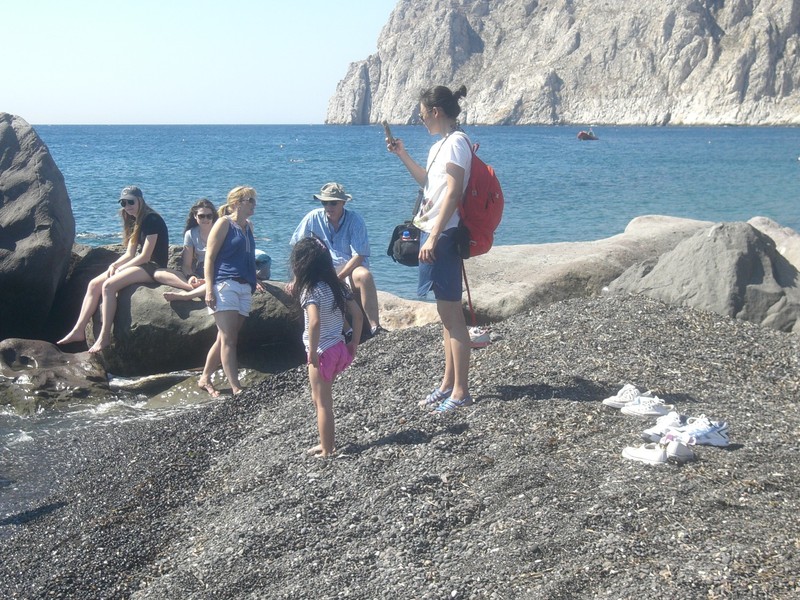 Here is another picture taken at the beach in Kamari. This village is 10 kilometers from Fira; at the southe east coast. Here you' ll find a black sand and shingle beach. It is five kilometers long. There is a good choice of shops, cafes and restaurants nearby. 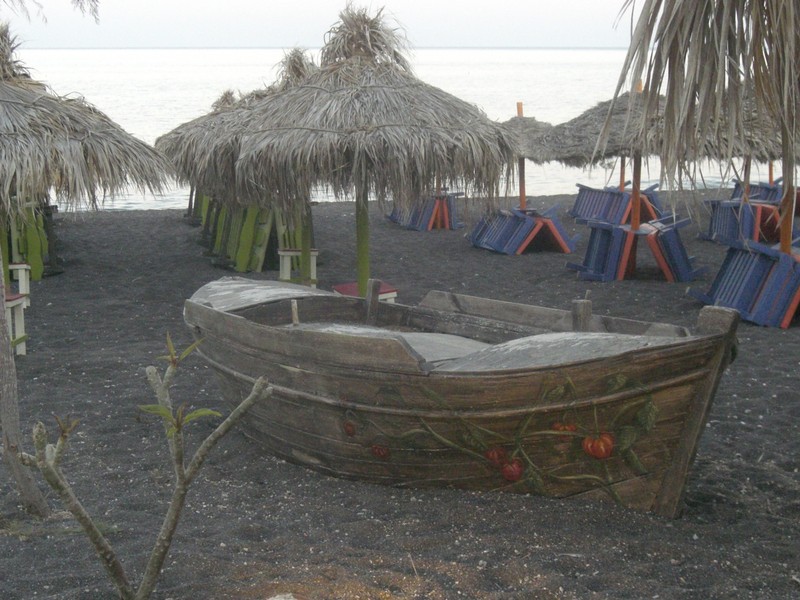 Perissa is a village about 13 kilometers from Fira; on the south east coast. It has a 7 kilometers long black beach. Being a tourist resort; as Kamari, there are lots of shops, cafes and eateries here as well.

This picture was taken at the beach in Perissa in the evening.

There are other villages to visit and things to do in Santorini. I hope to go there again quite soon.

Santorini is somewhere I have always fancied visiting but never yet got around to. Thank you for introducing me to some sights there I hadn't heard about and the quieter corners too

You are welcome Sarah!

Enjoyed this ... loved the photos of the churches.

by sylvia and david douglas