Some days ago I did a day trip to Venice. I have been there many times!

Venice is around two hours and half by train from the village where I live.

I have found an itinerary on the web some time ago and I wished to follow it.

Start from piazzale Roma. This is a large square where there is the coach depot in Venice. It is quite near the train station.

Cross the Calatrava bridge. It was designed by the Spanish architect Calatrava. 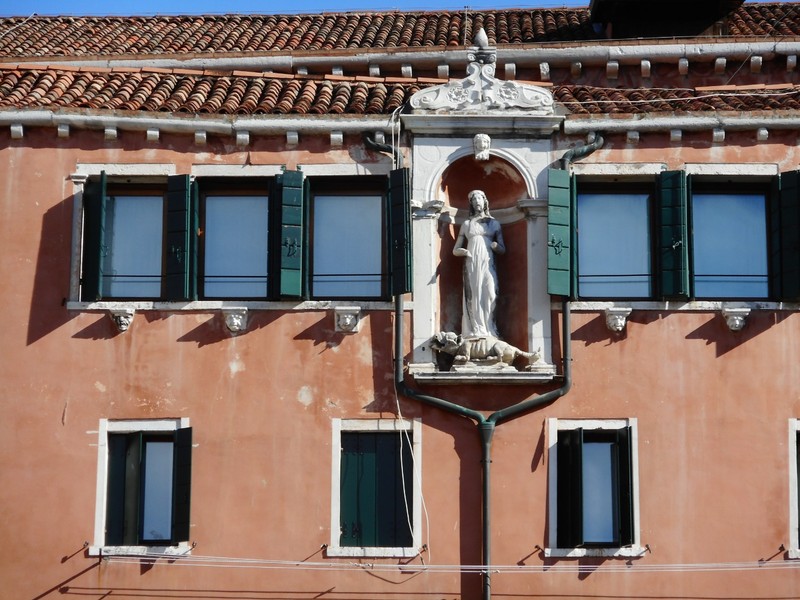 Head to campo santa Margherita. This square is surrounded by various palaces built from the XVI and the XV centuries. 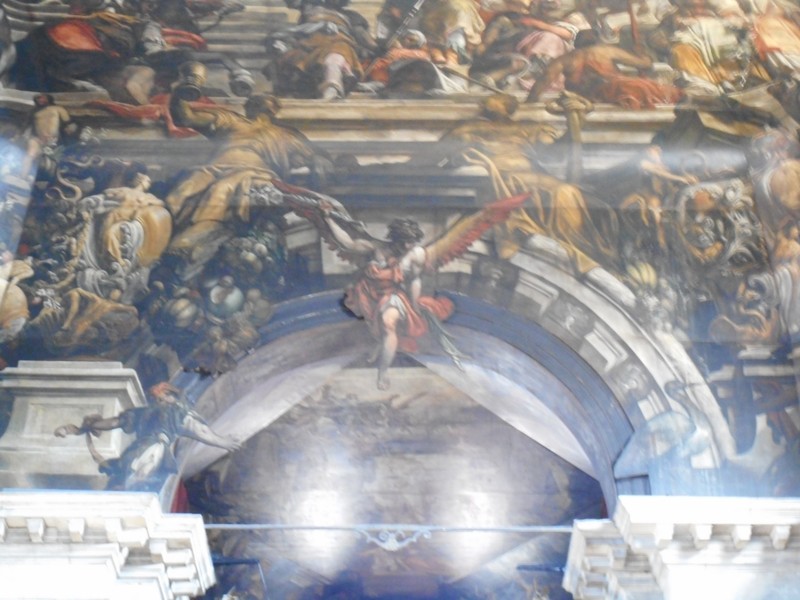 Saint Pantalon church is worth a visit for its large painting on its walls; the martyrius of saint Pantalon. It is not a fresco, but a painting on canvas. Gian Antonio Fumiani painted it between 1680 and 1704.

This church is situated just some meters from campo santa Margherita. 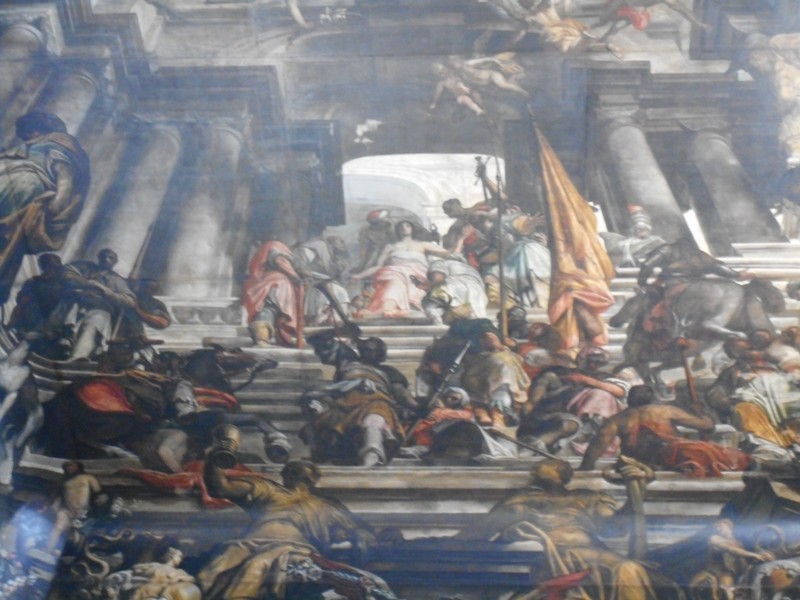 This painting is quite dark as you can see. 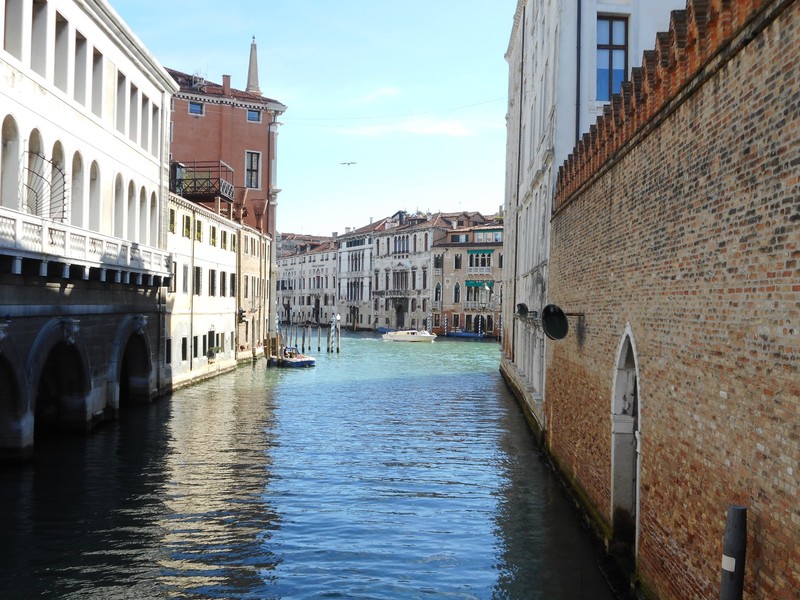 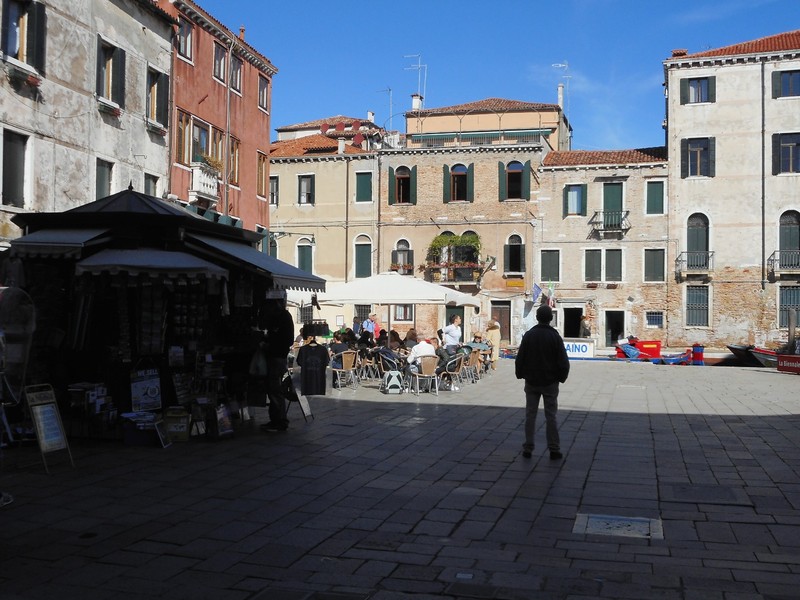 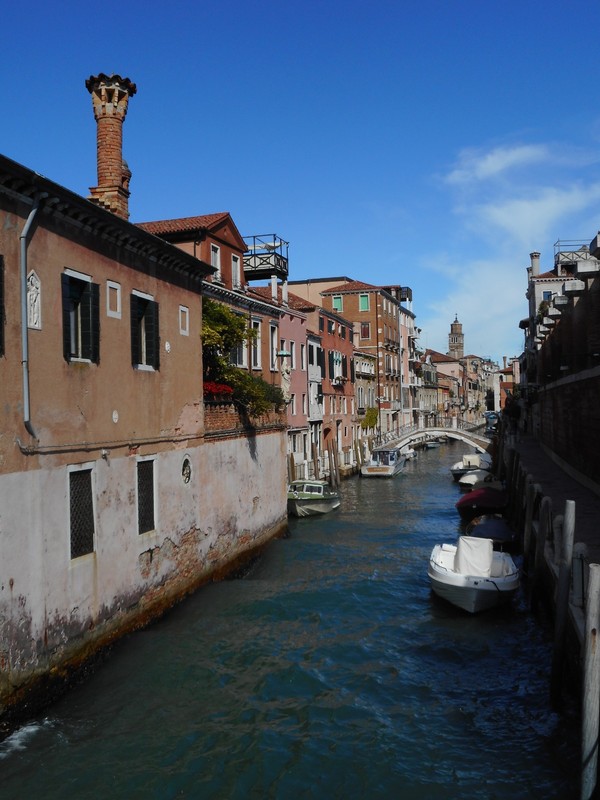 Follow the signs to saint Mark' s square. It is the only square in Venice. The other squares are called "campi".

Look for the squero di san Trovaso. A squero is a place where gondolas and other boats are repaired or made. The word "squero" comes from"squara"; a tool used to build vessels. 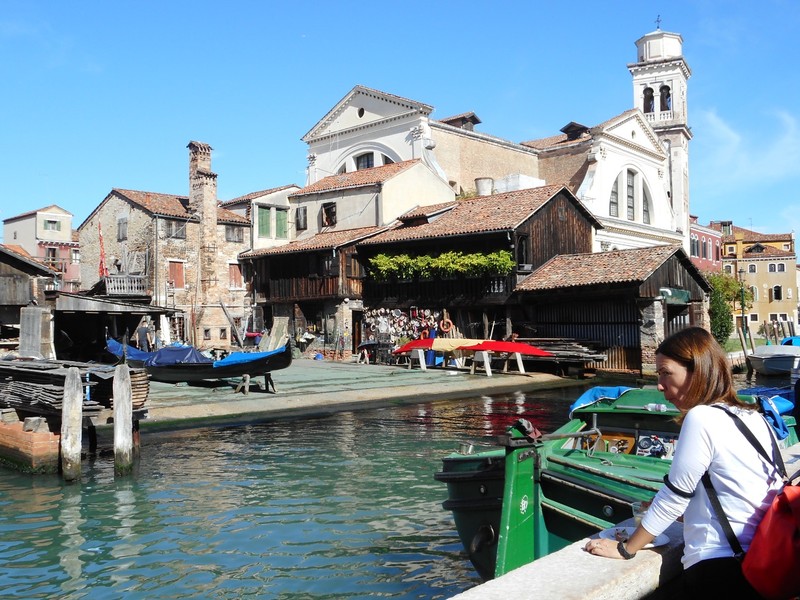 This squero has a Tyrolese look. It dates to the 1600. This is one of the last left. This boatyard is not open to the public.

Stroll to the fondamenta delle Zattere. This is a very long promenade is situated just off the squero di san Trovaso.

Search for the Gallerie dell' Accademia. It' s a large art museum. 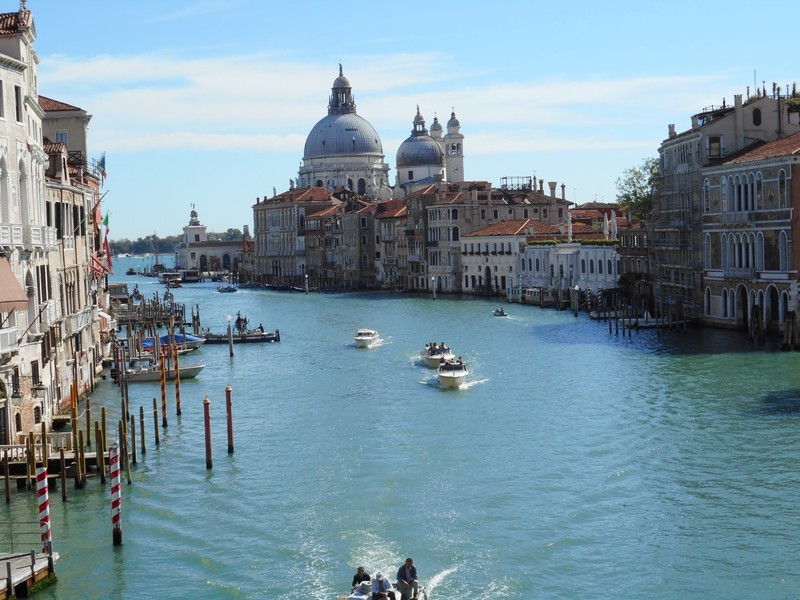 Walk to the Accademia bridge and then cross it. This picture was taken from this bridge. 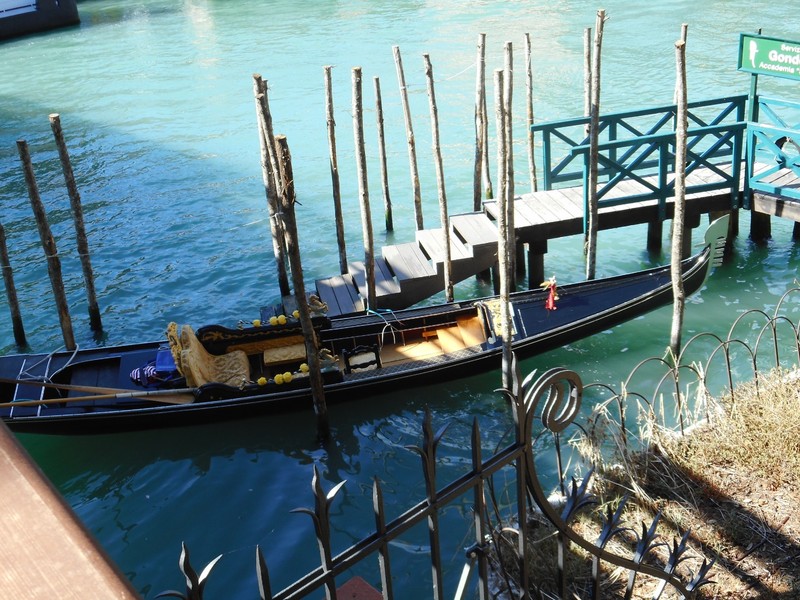 Near the Accademia bridge I spotted a gondola. The gondola is a long narrow black boat you see in some canals in this city. Today it is used for pleasure trips and for weddings.

This kind of boat requires a lot of time to be built. It is 10.85 long and its medium length is around 1.40 meters. It is built with nine kinds of wood.

The average gondola ride lasts forty minutes for a settled price. I think it should be around 80 euros (not per person; per ride). I' ve read you can bargain to get a lower price. After 7 or 8 p. m. it costs more to do a gondola trip. 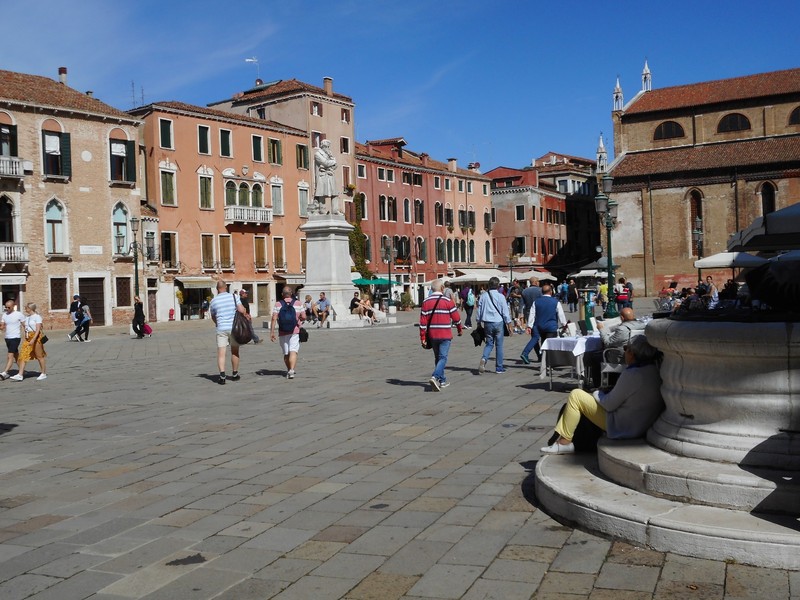 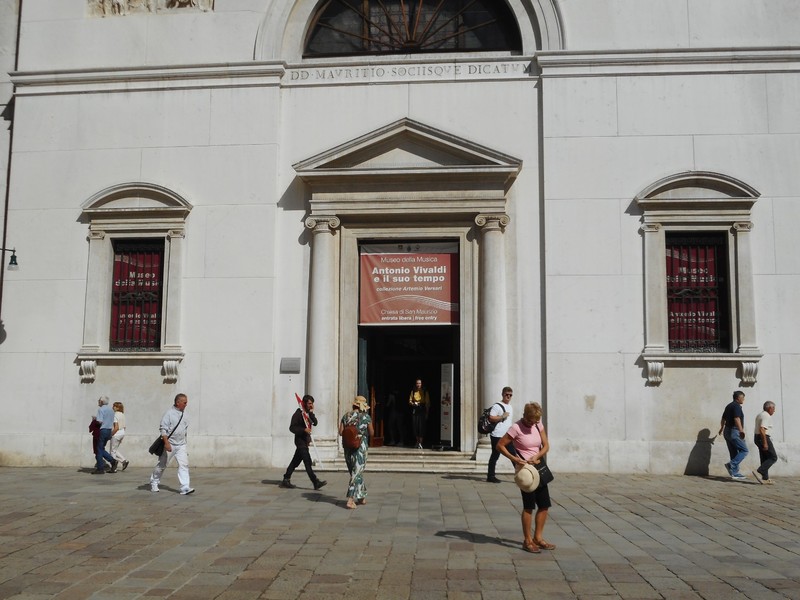 Walk along the calle on the left side of the church of san Maurizio. 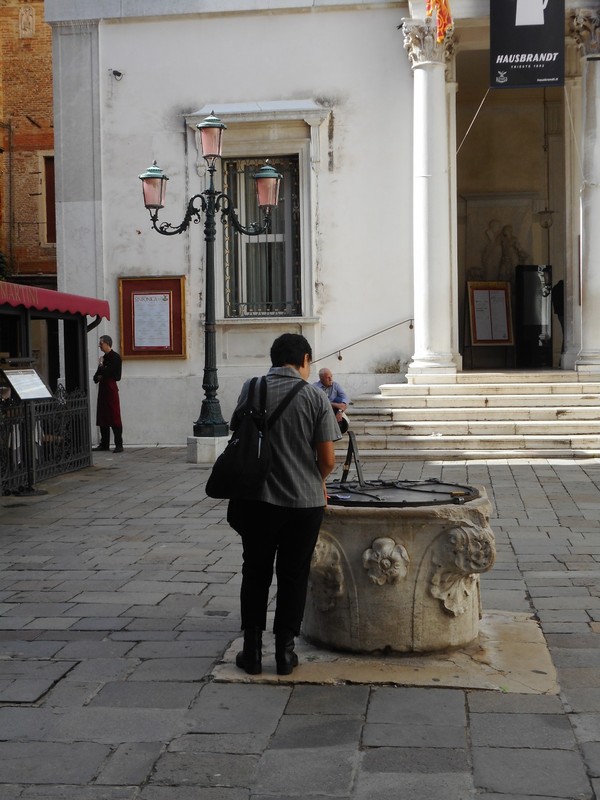 The next stop will be at the theater la Fenice.

Head to the Frezzeria. It is a street. 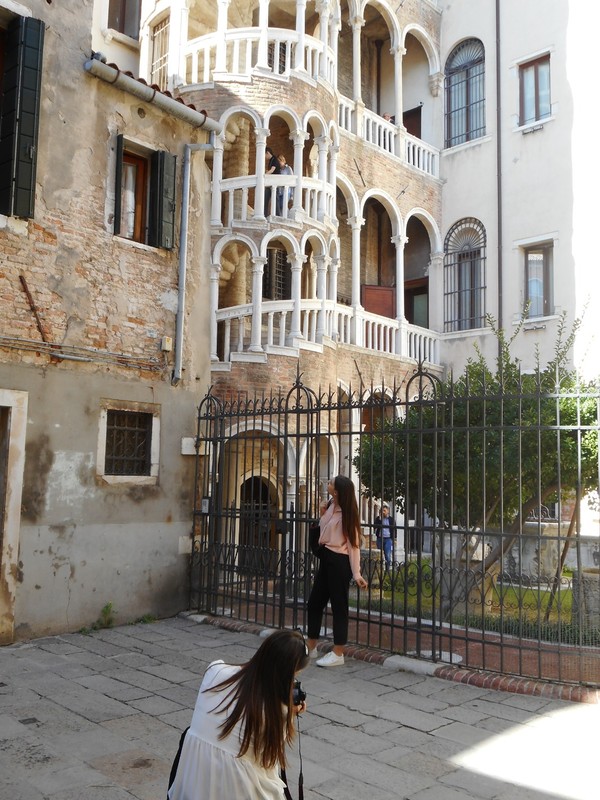 Try to find the Palazzo Contarini del Bovolo. It was built in the late XV century. This palace has a beautiful exterior spiral staircase. You can climb to its top and enjoy the landscape over the surrounding areas. 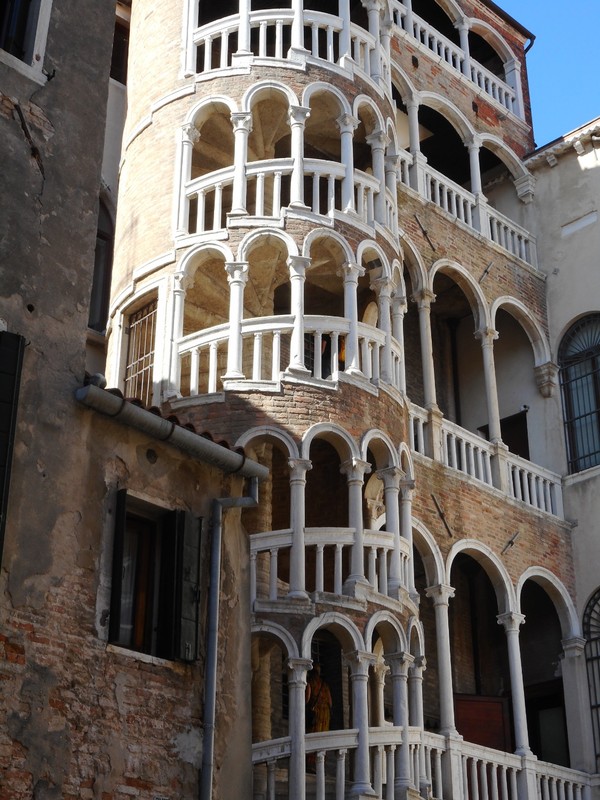 It is located in Saint Marks' area. If you like to go there you have to go to Campo Manin, toward calle della Mandola. You find it near campo san Bortolo. 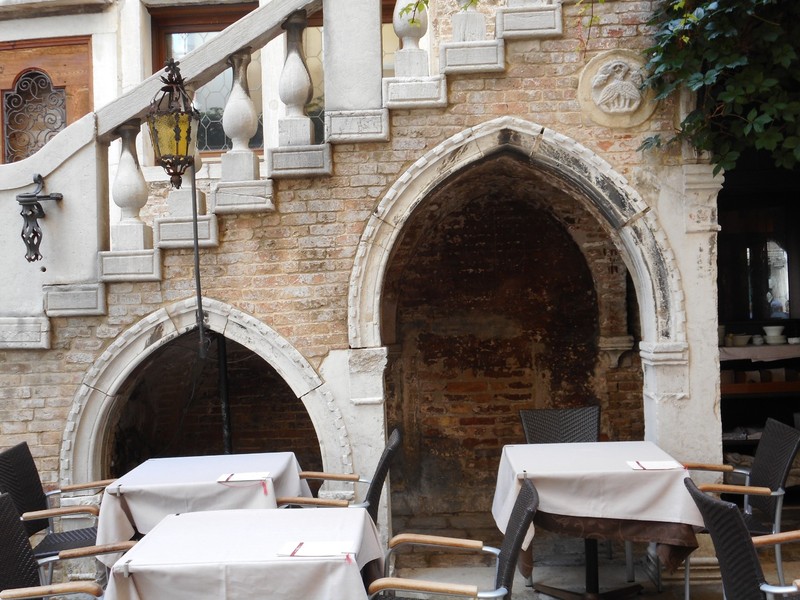 This is part of a restaurant. 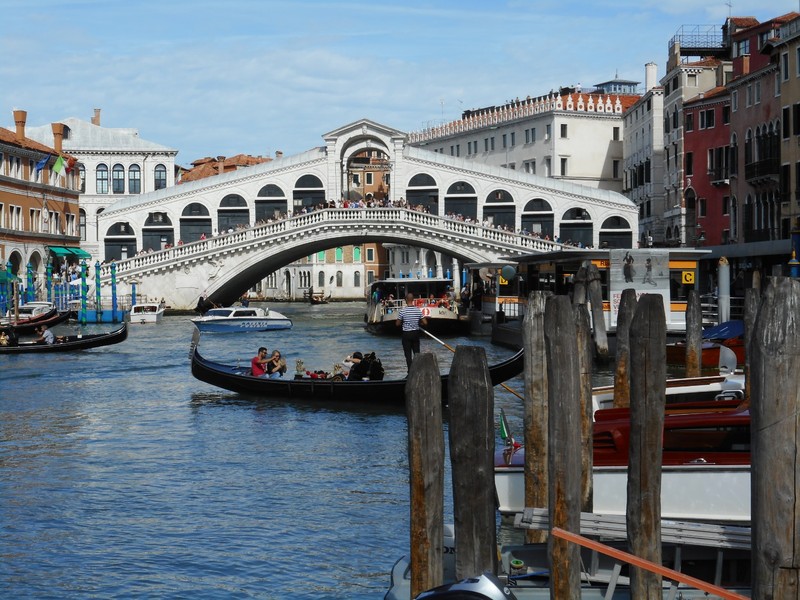 Walk to the Rialto bridge. 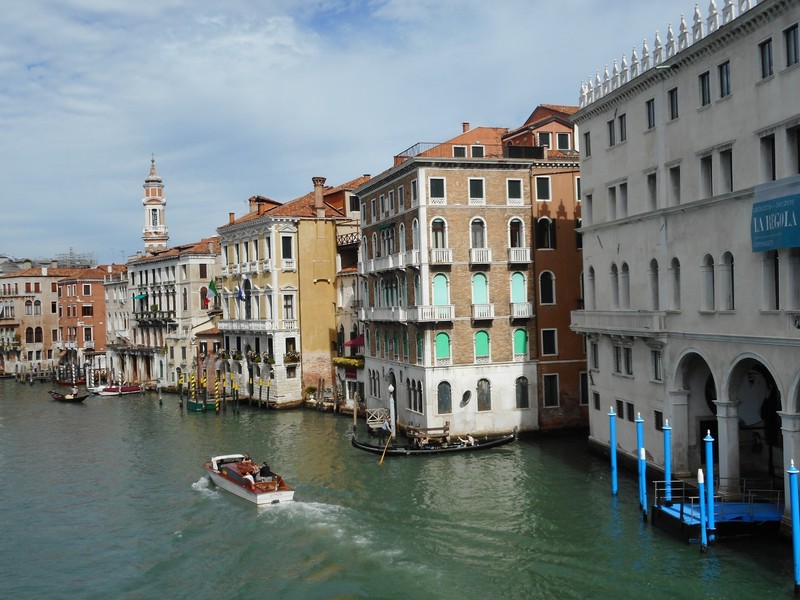 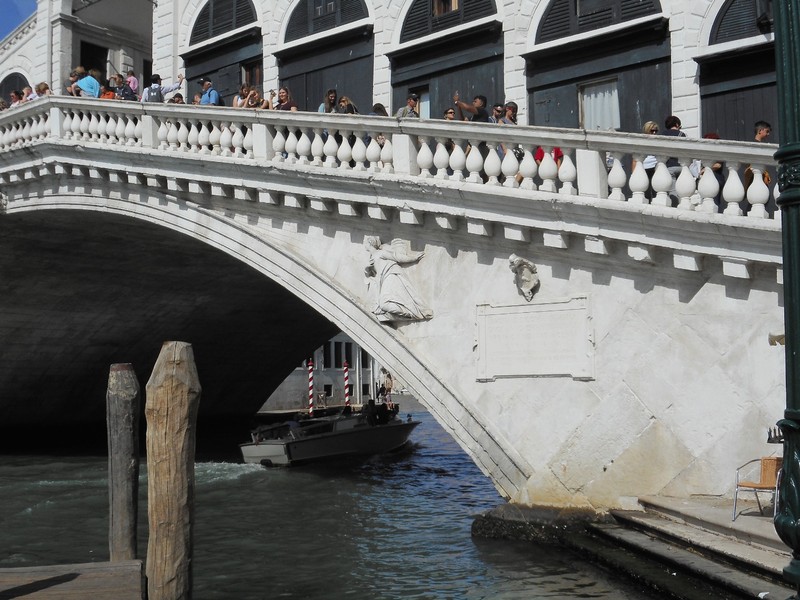 The Rialto bridge was originally built on disused boats in 1175. It was substituted by another one made of wood in 1265. It had a movable central section that could be raised to allow the passage of the tallest boats. This was partly burnt in a revolt in 1310 and then rebuilt.

It collapsed in 1444 under the weight of people watching a boat parade during the wedding of the marquis of Ferrara. It collapsed again in 1524.

The current structure of this bridge was built between 1588 and 1591.

This bridge is formed by two inclined ramps with shops on either sides and covered by a portico. It has three walkways. 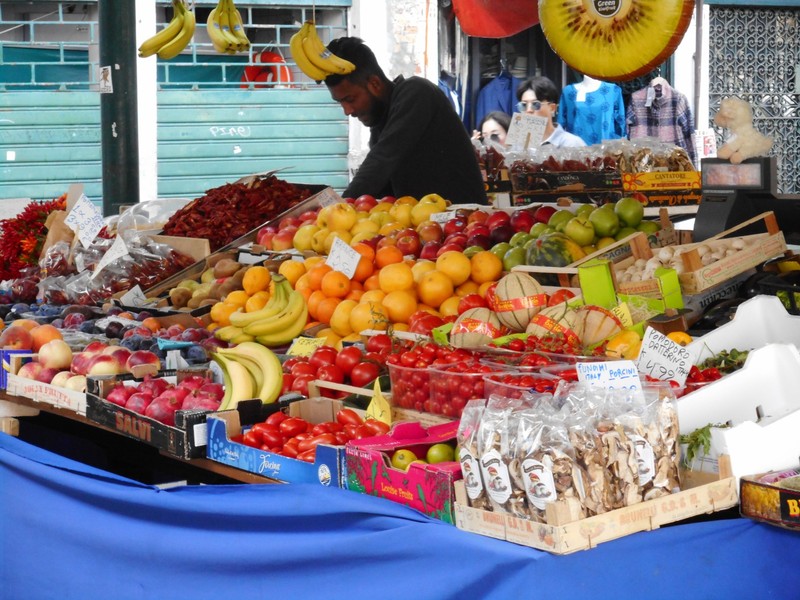 I spent some time at the Rialto market. It is made of the Erbaria; the fruits and vegetables market and the fish market. This market is located quite near the Rialto bridge. 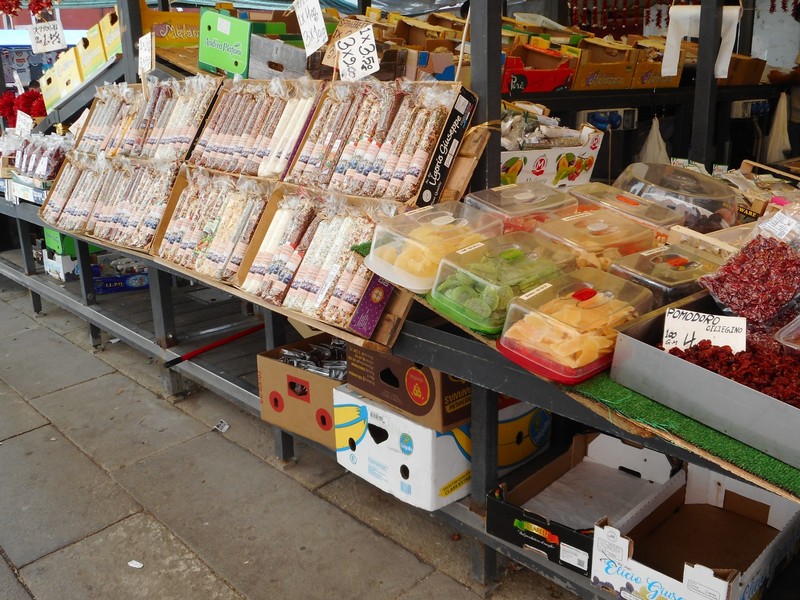 Here you can find almost every kind of vegetables and fruits. I didn' t visit the fish market when I was here. 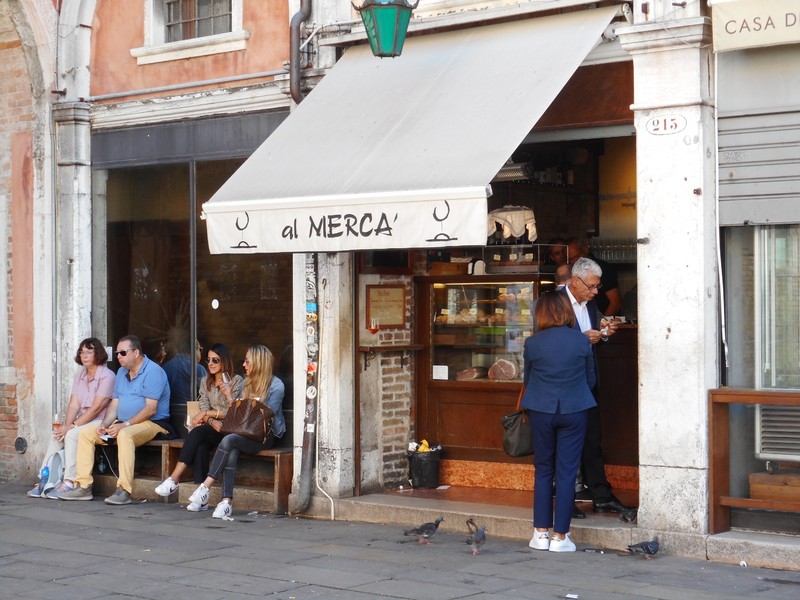 I had a simple lunch made of a couple of sandwiches and a spritz (it is alcoholic drink) at the bar "Al Mercà". This is a "hole in the wall" bar where they have a good choice of small sandwiches with cold cuts. They also serve various kinds of wines.

This bar is located near the Rialto market. 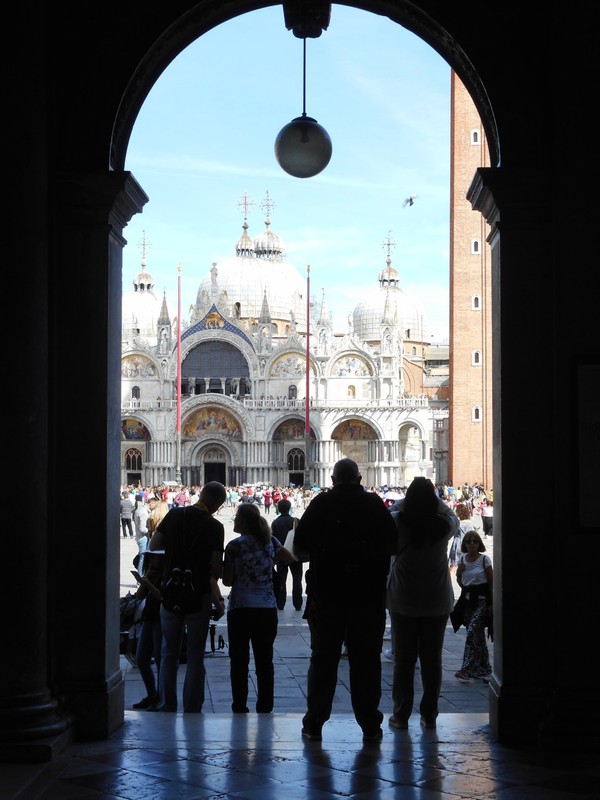 Visit saint Mark' s square. It was laid out in the 9th century and enlarged in the 12th century. Irs main sight are saint Mark's basilica, its belltower and the Ducal Palace. There are even some museums, several shops and a couple of expensive cafes at this square.

Originally saint Mark' s basilica was built in 828 to house the remains of saint Mark the evangelist. These were stolen by two Venetian merchants from Alexandria in Egypt.

Much of this church was destroyed in 974 by a fire originated in the Ducal Palace. Later a second church was built. 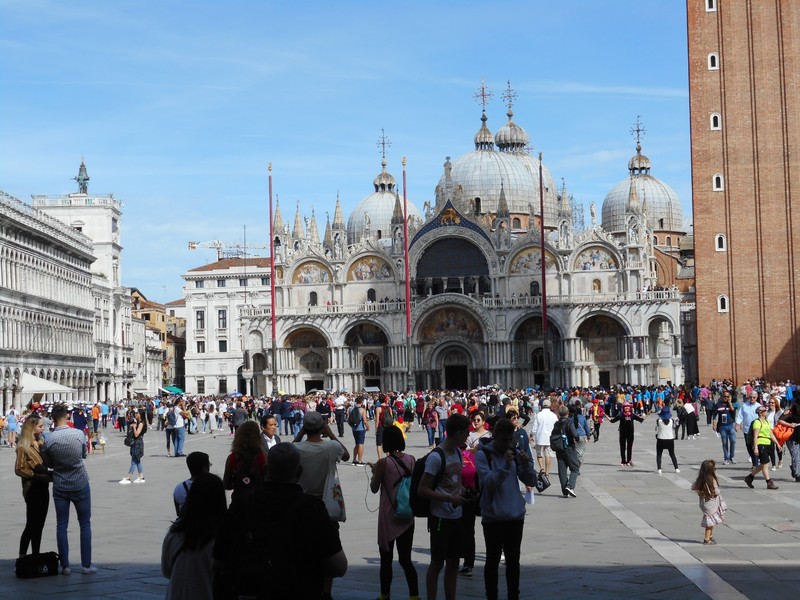 The church we see today is the result of the transformations made between the XIth and the end of the XIV centuries. It was the ducal chapel until 1807, when it became cathedral.

The church is decorated with mosaics made from the XII to the XIV century. There are mosaics both outside and inside of this worship place.

One of its highlights is the Pala d' Oro. This golden altarpiece is decorated with 2000 gemstones. It is 3 meters wide and 2 meters high and is made of gold and silver. It was made between the X and the XIV centuries.

Inside the basilica you can visit the treasury. It is located behind the main altar. 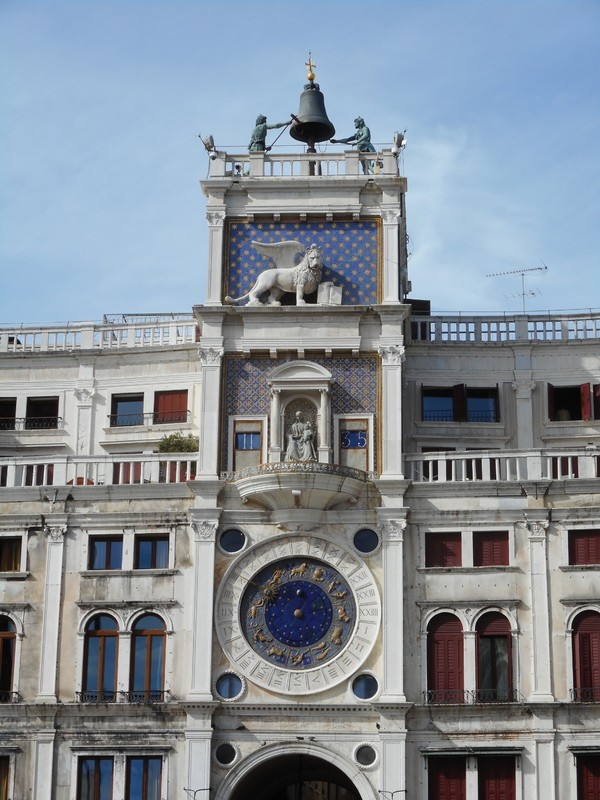 In saint Mark' s square; beside the basilica there is a tower; the torre dell' orologio. It was built between 1469 and 1499. 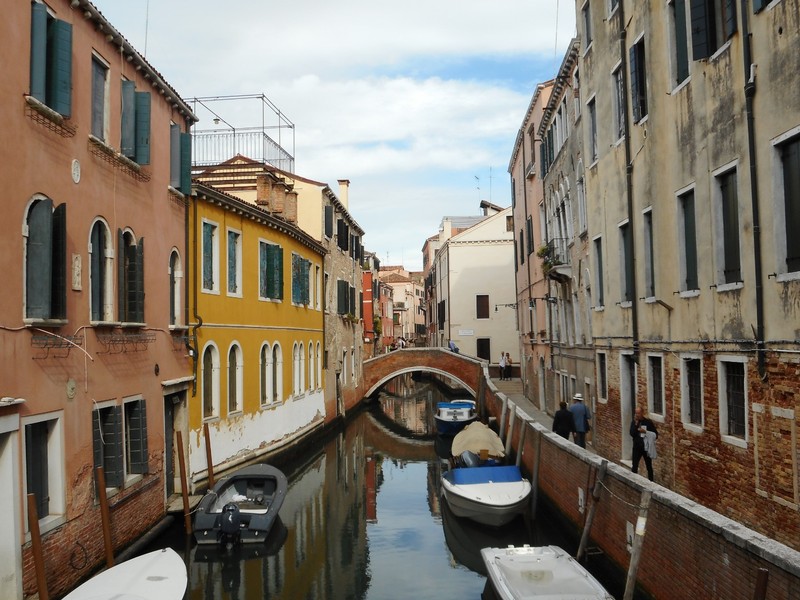 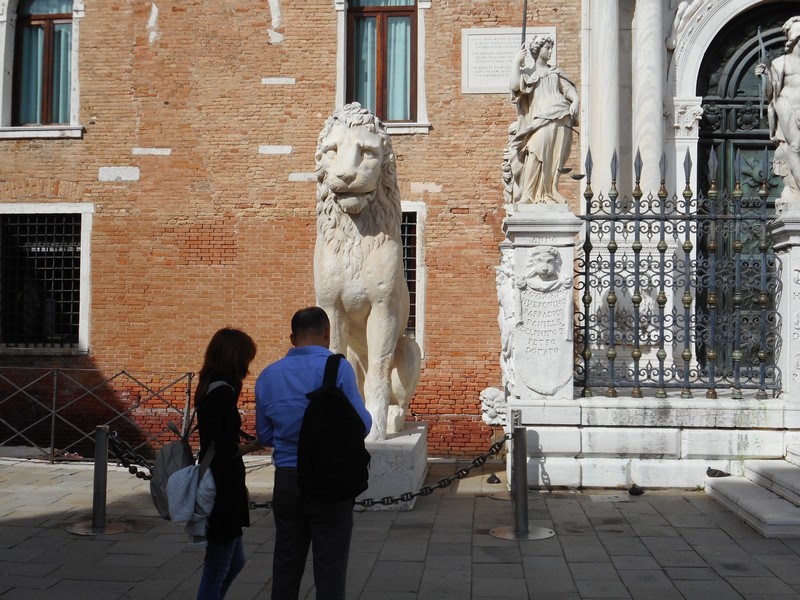 I got lost at the arsenal area so I decided not to follow the itineray, but to go to the station. 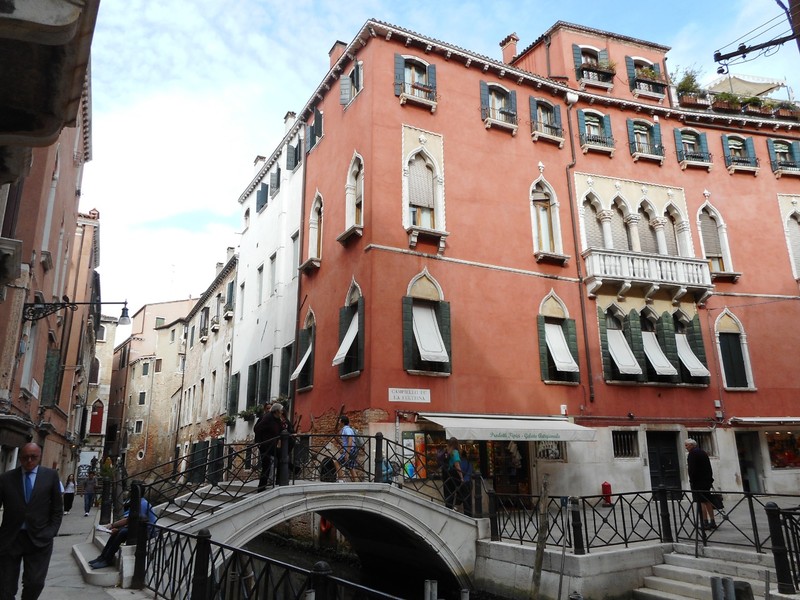 On my way to the train station I spotted this beautiful red palace.

Thanks a lot for your advice!

You are welcome! Let me now when You will go to Venice...we could meet there.

Such a lovely page Maurizio! You do bring back so many memories with your page! Thanks you for that! I do have to admit that I really have a soft spot for Venice, it is beautiful. I see you were in luck with the weather, having some nice blue skies :-)