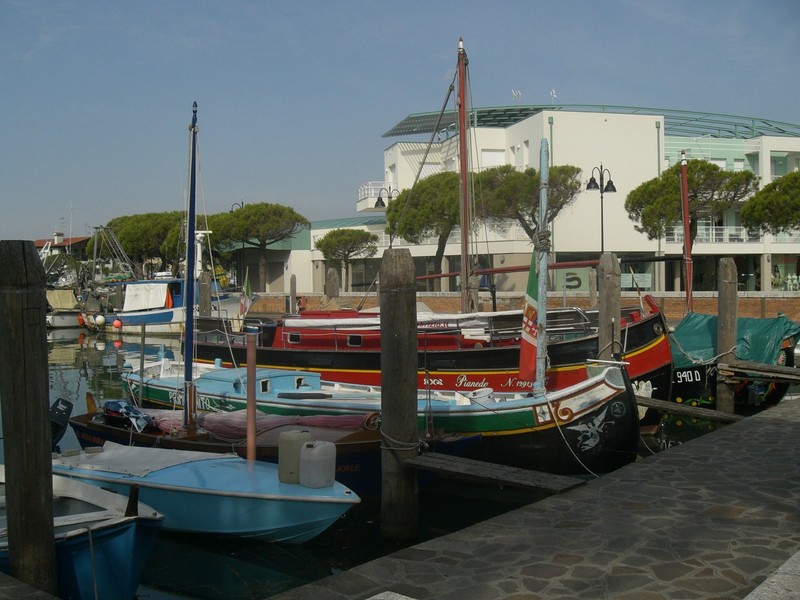 Caorle is a beautiful sea side town situated in the Veneto region. 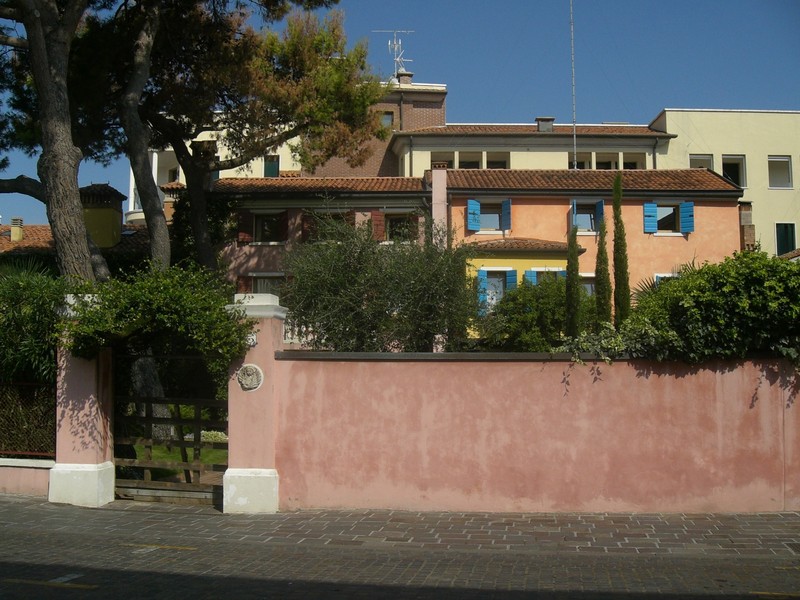 I usually spent around a week on holidays here when I was a kid. Some years ago I went back to Caorle after a hiatus of around thirty years.

I dicovered a town with more shops, restaurants and cafes. 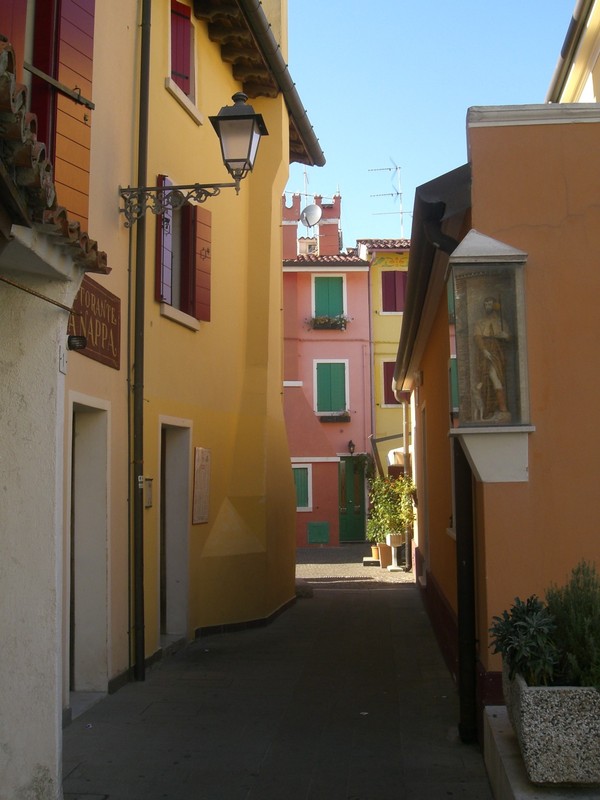 The old core of Caorle is made of a maze of narrow streets called "calli".

Strolling along several calli; all of a sudden you can find yourself in a small square, or you will discover some nice colourful houses. 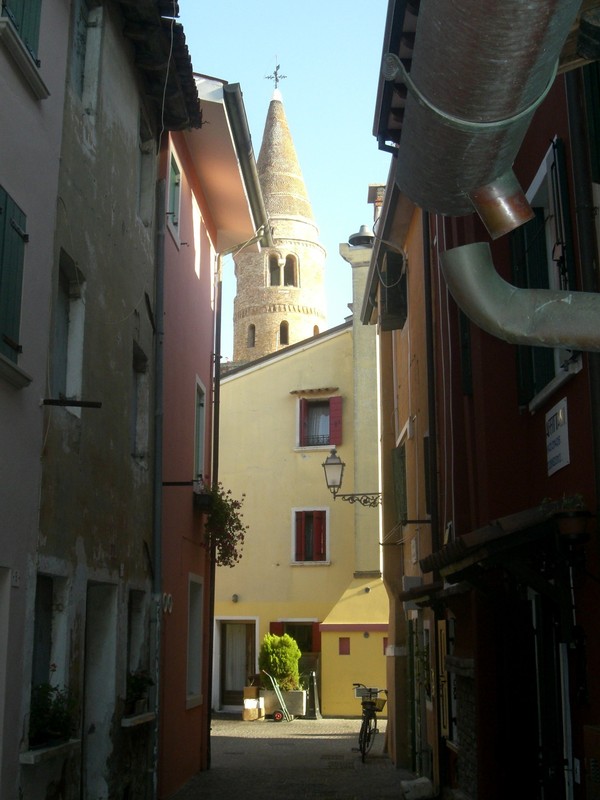 There are also two churches in the old core of Caorle; the church delle Grazie and Sain Roque church. In the old core there is a good choice of cafes, restaurants and shops. 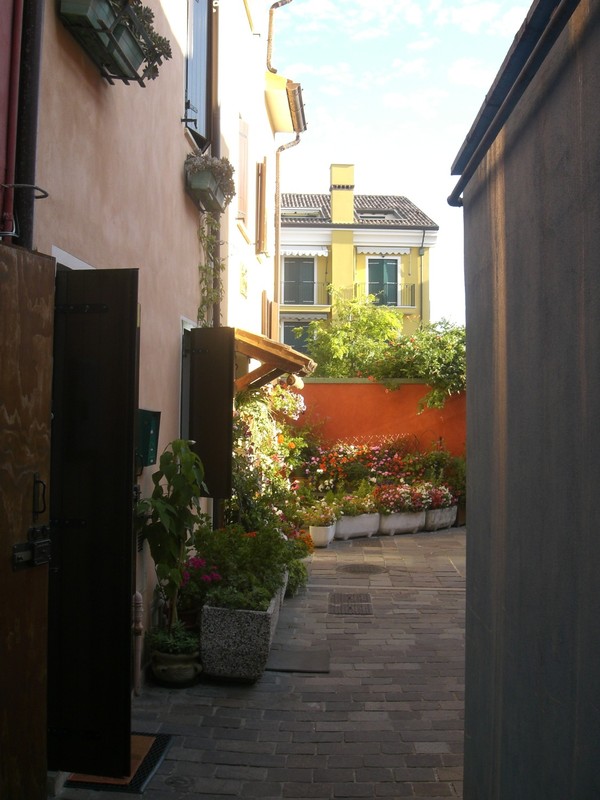 In old times, Caorle was crossed by several canals, but later they have been closed except canale Varragio, that now is the harbour you see in the center of this town. 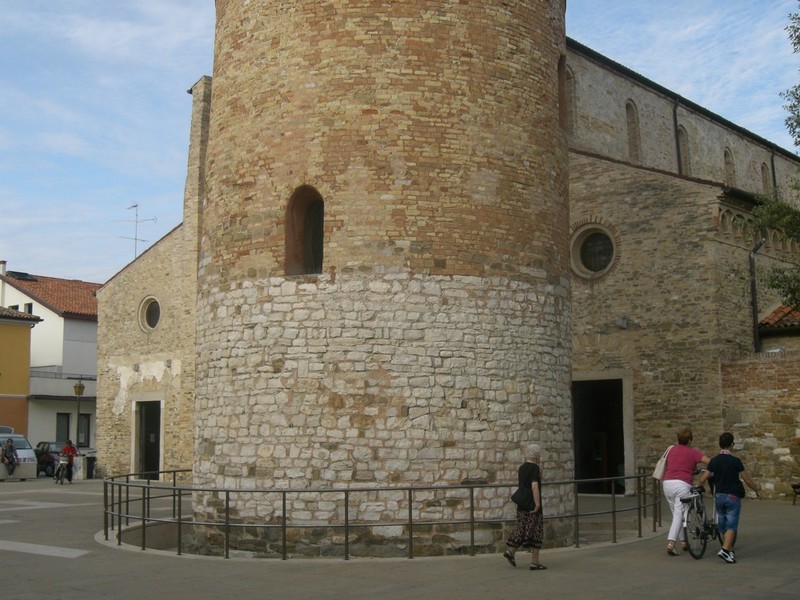 The cathedral in Caorle (duomo) was built around 1038 probably on the remains of a previous church dating from the VIII century.

One of its main sights is the so-called pala d' oro. It is a work made of gold and silver made of six pieces. The oldest of these date to the XIII century. It is a pity it isn' t possible to see it properly, because it is located too far; it is in the apse.

Next to the church there is a cylindrical bell tower; built in 1065. There is also a museum with various religious artefacts near the cathedral. 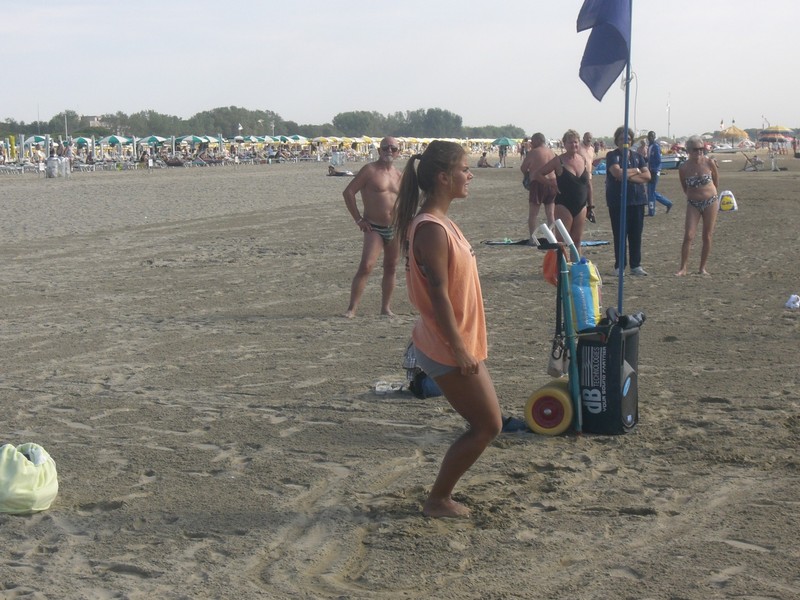 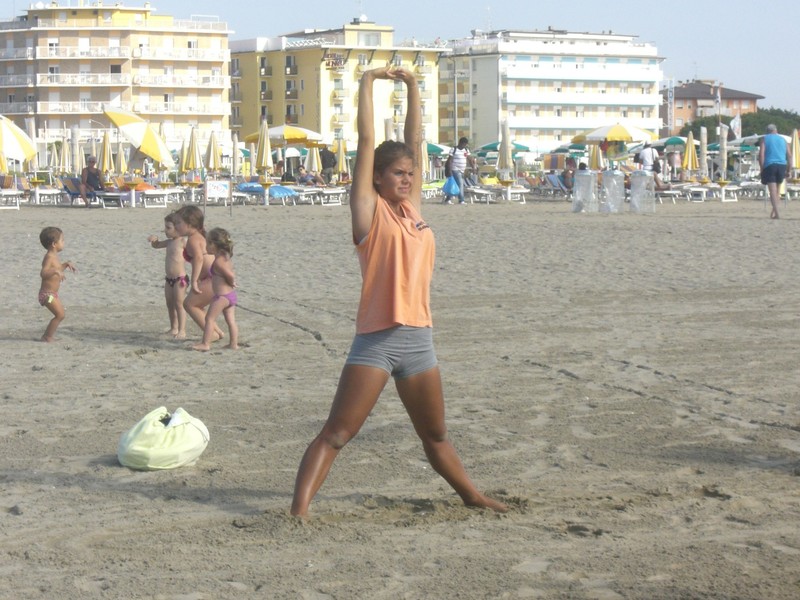 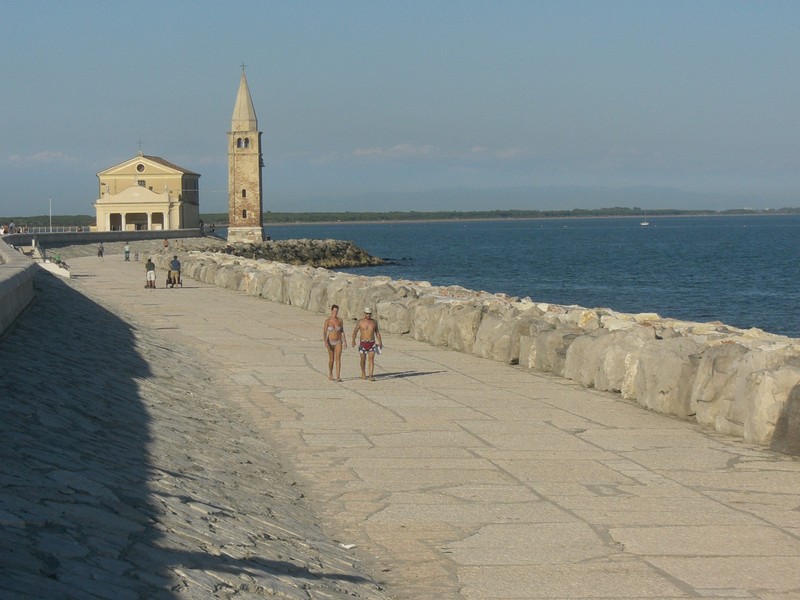 There is a small church overlooking the beaches in Caorle. The name of this worship place is chiesa della Madonna dell' Angelo. It was built in 1751, but it is tought it was built originally in 402.

According to a legend; long ago some sailors spotted a statue on a rock floating on the sea. They tried to take it to the beach, but their attempt failed. Then some children succeded.

Every five years; on the second sunday of september, a procession with this statue is held around Caorle. 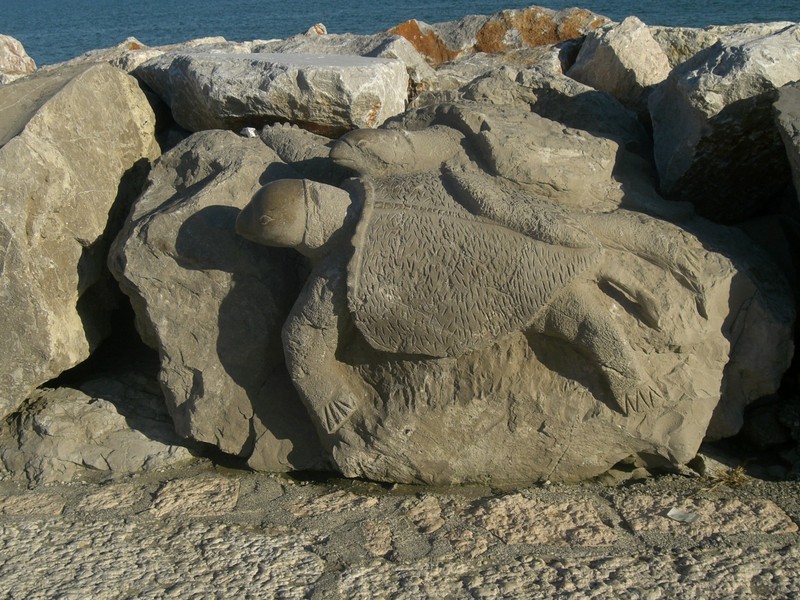 Since 1992; every two years; probably in june; some sculptors from Italy and from abroad come to Caorle to enter a contest called Scogliera Viva. They choose a big stone on the beach and create their masterpiece that will live forever. 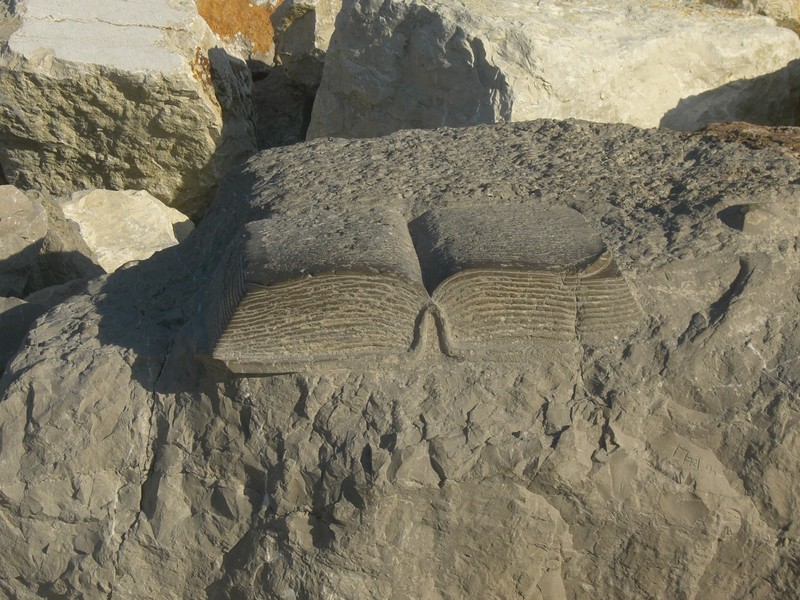 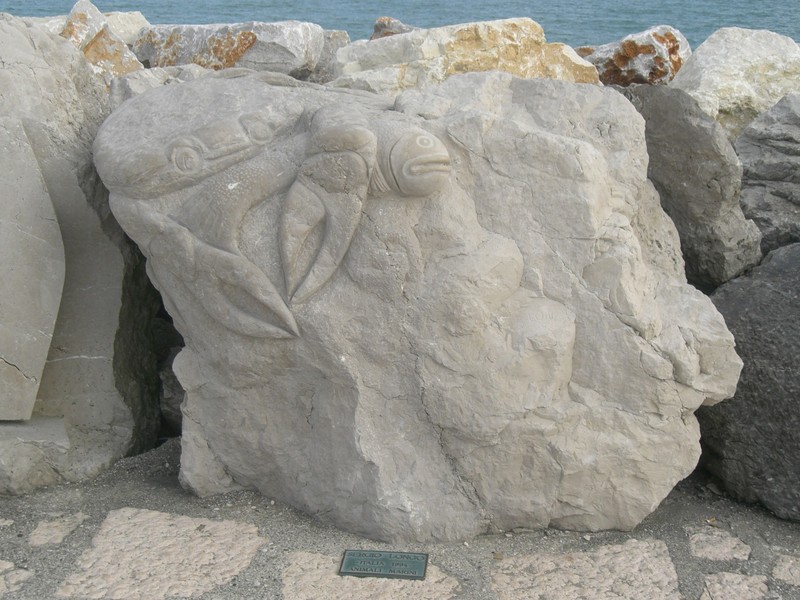 The result of this contest is practically a beautiful and quite large sculpture museum in the open air.

You can see these sculptures near the church (chiesa della Madonna) on spiaggia (beach) di Ponente. 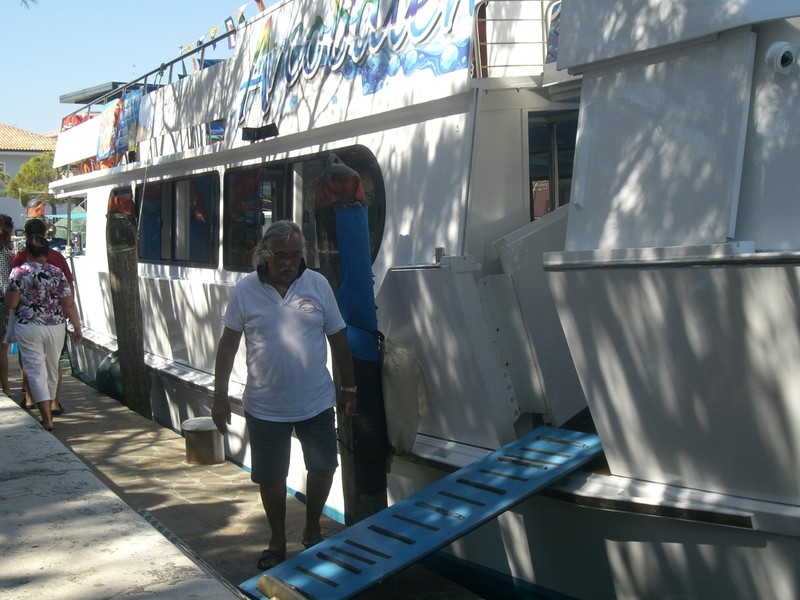 One day I took a 2.30 hours boat trip from the harbour in Caorle. I could enjoy the sea, part of Caorle and some beaches from afar. A short visit at the "casoni" (20 minutes) is included in this trip. 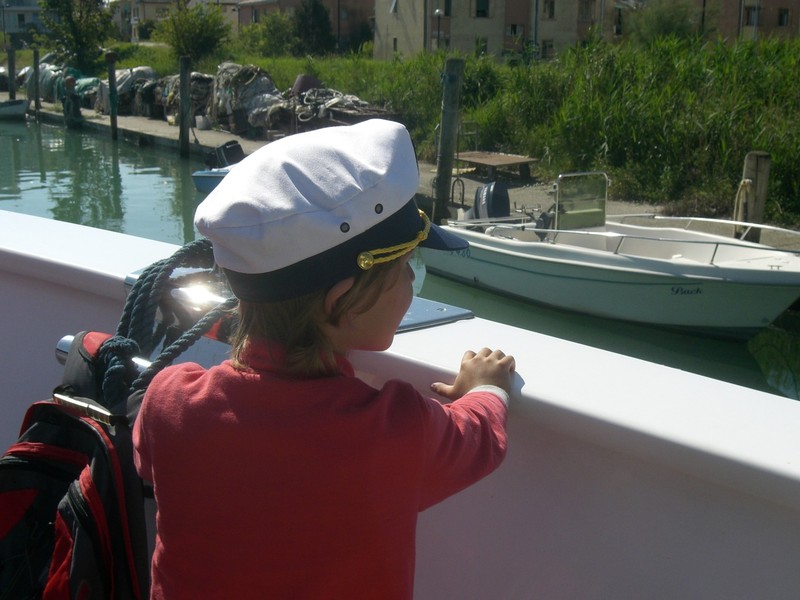 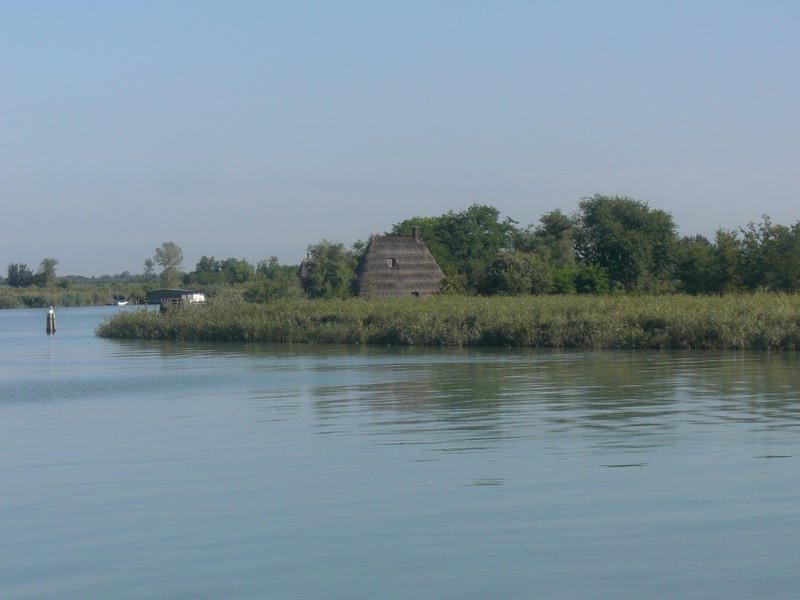 The casoni are big huts used as temporary homes for fishermen. There are lot of them at the Caorle lagoon. The first ones were built centuries ago. 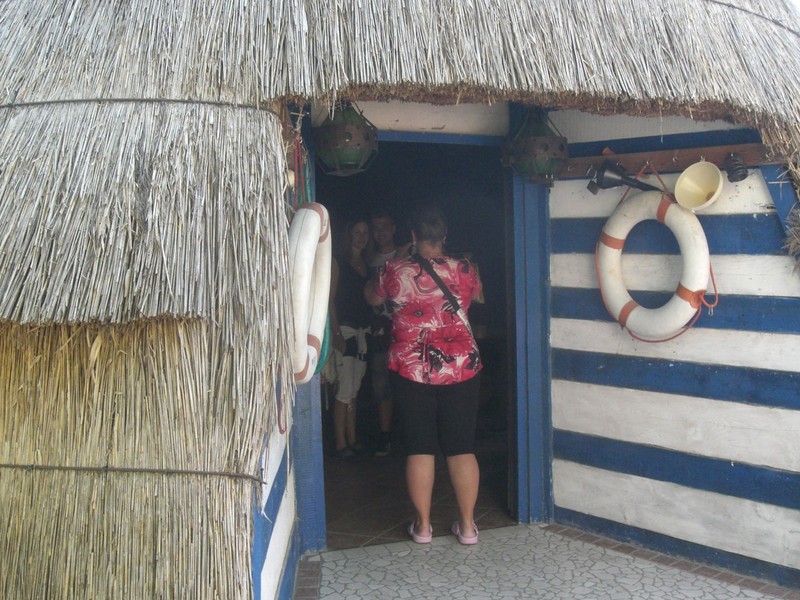 They are made of a room with a table, chairs, stove and everything people need to live in that area. Today these huts are still used by several fishermen. 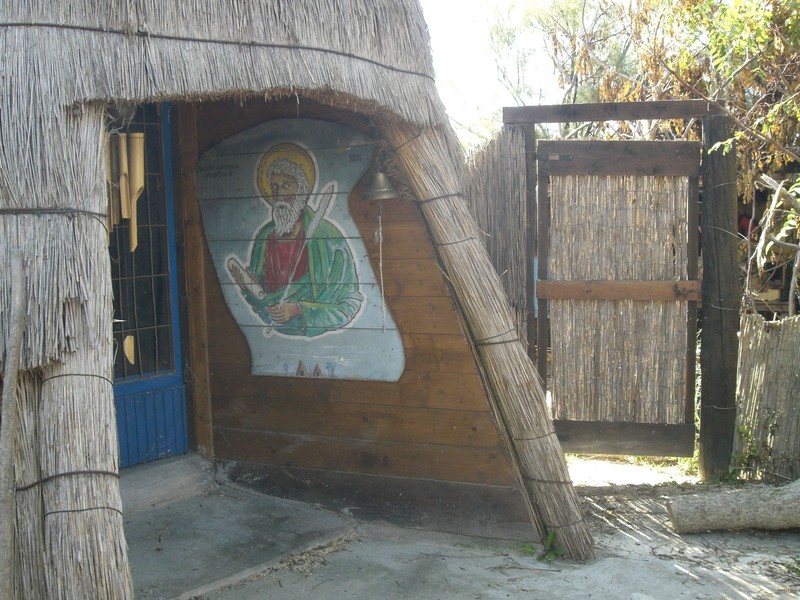 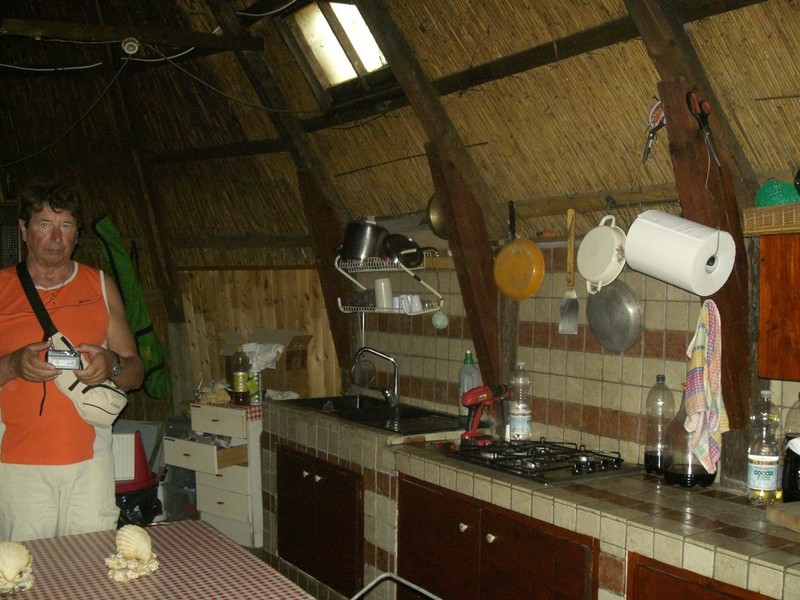 You can visit some casoni inside only if you take a boat trip. 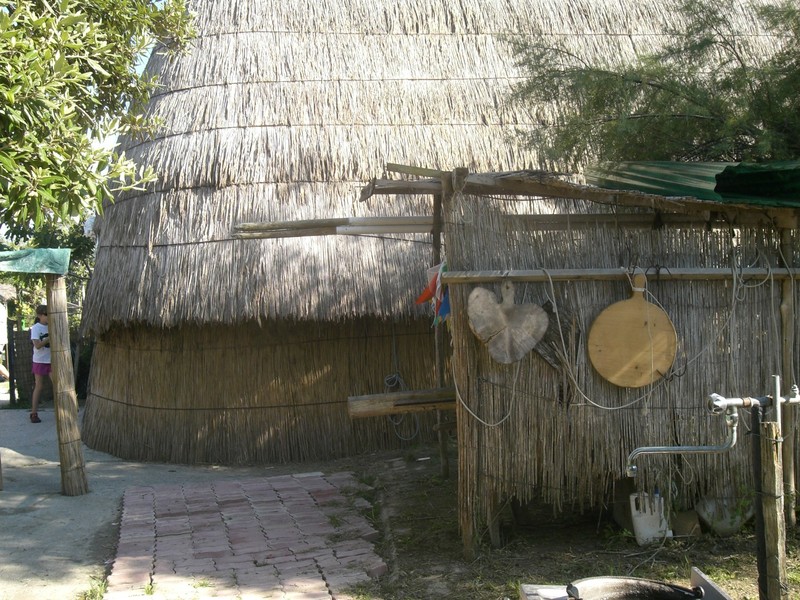 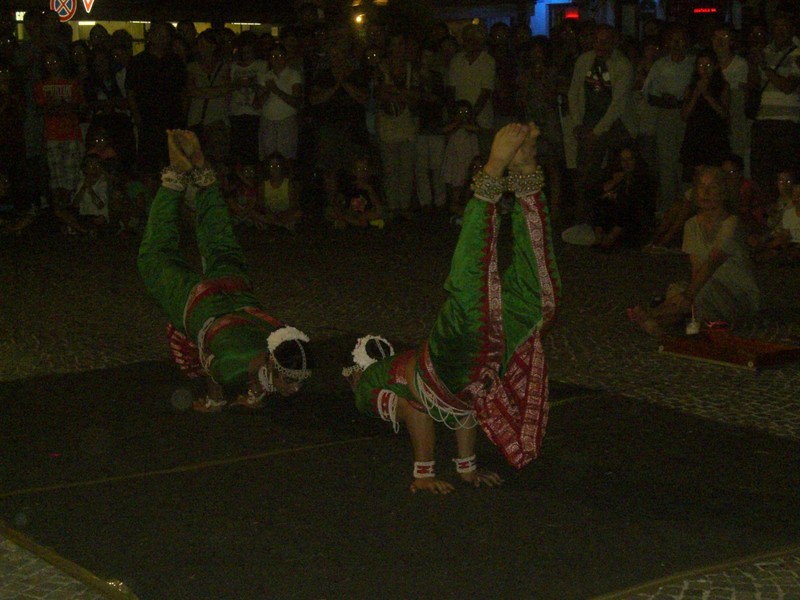 La Luna nel Pozzo is a free of charge festival of "street art" which takes place every year at the beginning of september. It lasts for some days. 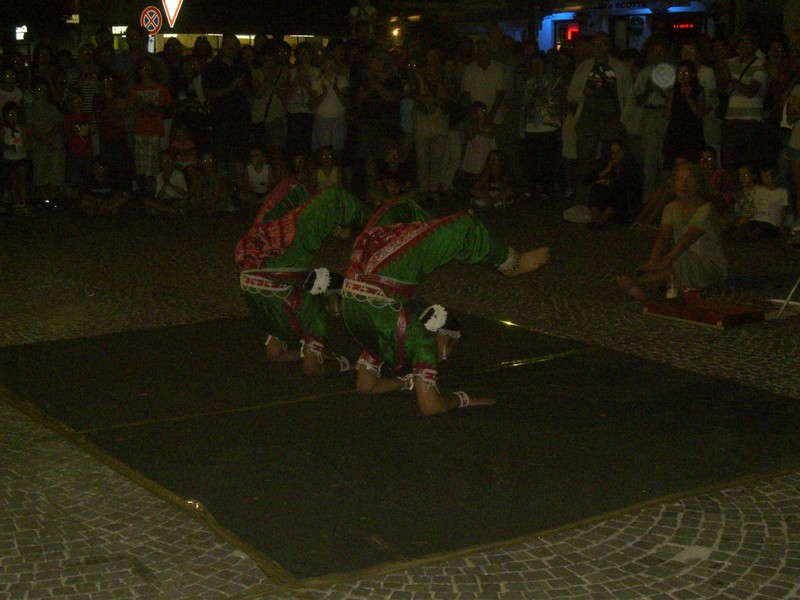 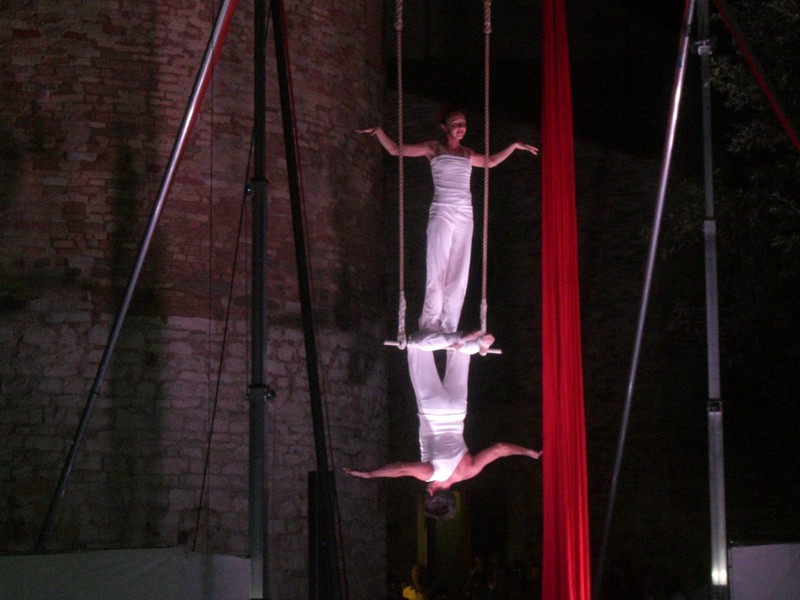 Lots of artists from Italy and from various European countries (even from other continents) come to perform in various squares of Caorle. So you can enjoy some shows of acrobats, dancers, musicians, singers, clowns and other kinds of artists.

If you miss some performance you will have the opportunity to watch it later on. The same shows are repeated for two or three times the same day or the next ones. 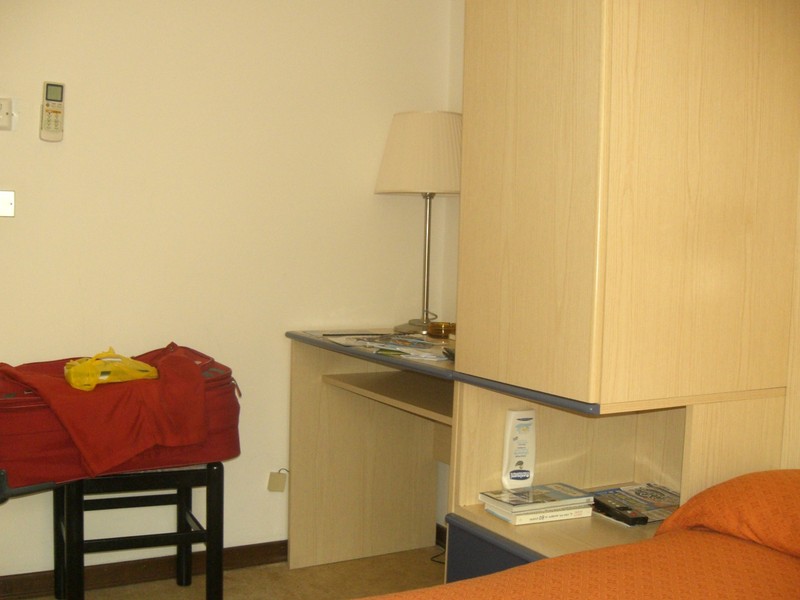 I booked a double room for a week at hotel Firenze; half board. This was quite small, but ok for a single traveller. It had a bathroom en suite with shower. This hadn' t a base to contain the fallen water. So that the bathroom almost flooded every time I used it.

This hotel has a communal room with a large screen television and a small cafe with a terrace. 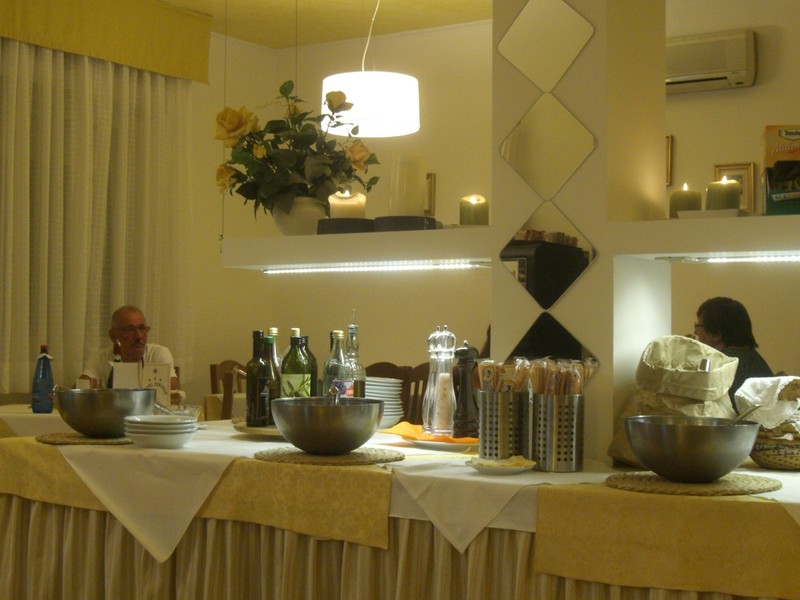 The buffet at breakfast consisted of bread, pastries, jam, cold cuts, cheese et al. There is a machine to get hot drinks as coffee and cappuccino. At dinner you have to choose your meal the day before, but you have a choice of several dishes. The food at this hotel was very good. 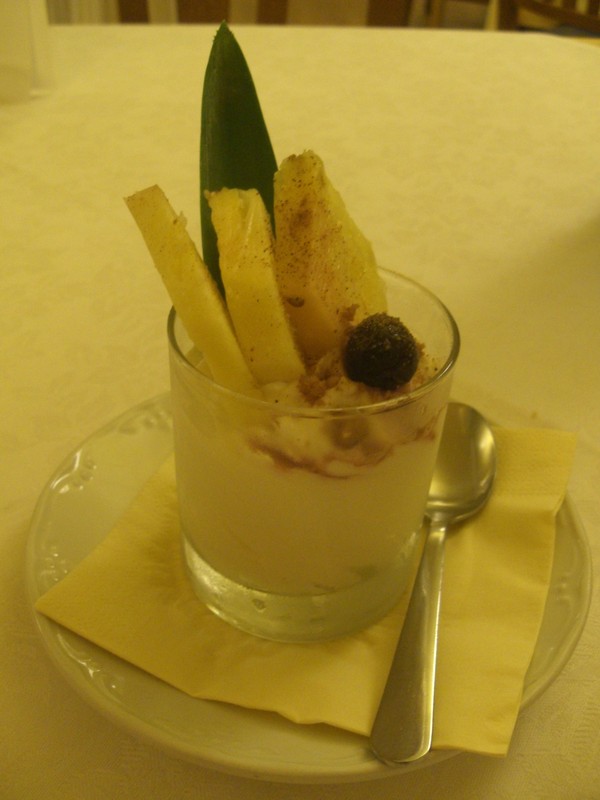 Hotel Firenze is a medium sized hotel located some 500 meters from the center of Caorle.

It is possible to go to Caorle from Mestre (a city near Venice) by coach. Don' t forget to ask the driver if the coach goes directly to Caorle or if you have to change bus somewhere.

Just a warning; the bus station in Caorle is quite far from the town center. A taxi would be useful if you have problems to walk for a long time or whether you have a heavy luggage.