Koper is a nice town located in the south western part of Slovenia. It is only twenty kilometers far from Trieste; in Italy.

I have visited Koper some times; as day trip from Portorose. It is easy to go to Koper from Portorose. There are several buses that operate between these two towns every day.

This town has a nice old core; some nice squares and a museums (or maybe some more).

Titov trg is the main square in Koper. It is bordered by several buildings.

Here you can visit the cathedral of the Assumption. It was rebuilt in the XVIII century and is dedicated to Saint Nazarius; Koper' s patron saint.

Beside the church there is a bell tower that was originally separated from the church. 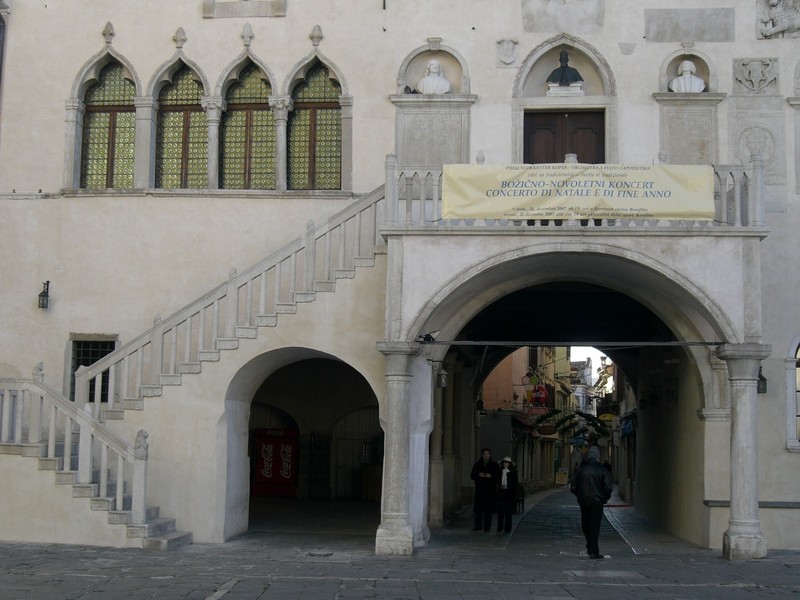 Near the bell tower we see the Praetorian Palace. This was the residence of the podestà; the ruler of the town who was chosen directly by the doge (the ruler) of Venice. Its current structure dates from the mid 15th century.

This palace was built on the site of two XIII century houses. In the second half of the XIII century these were joined. Today the Praetorian Palace houses the town hall and some rooms opened to visitors. Ask at the tourist office on the ground floor for a guided tour of the palace. 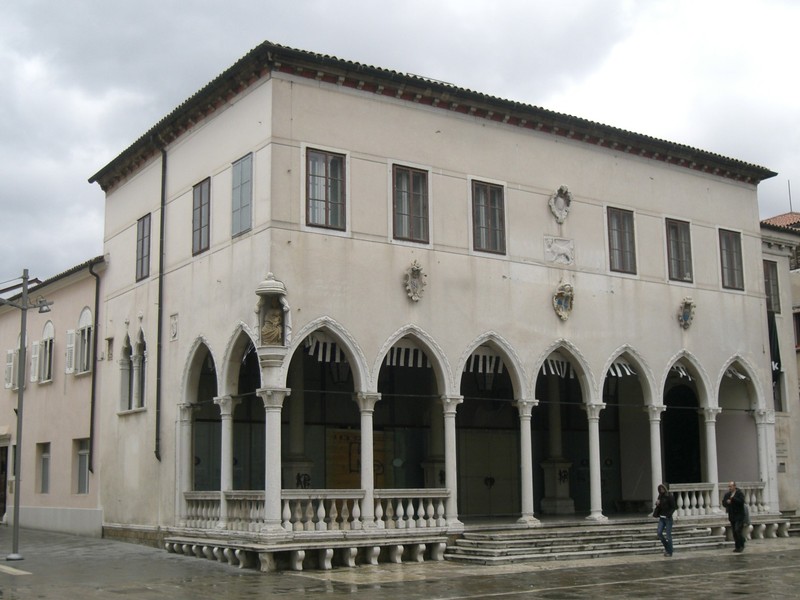 Opposite this palace there is a loggia. It was built in 1463 and renovated in the 17th century. Today it houses a modern cafe. 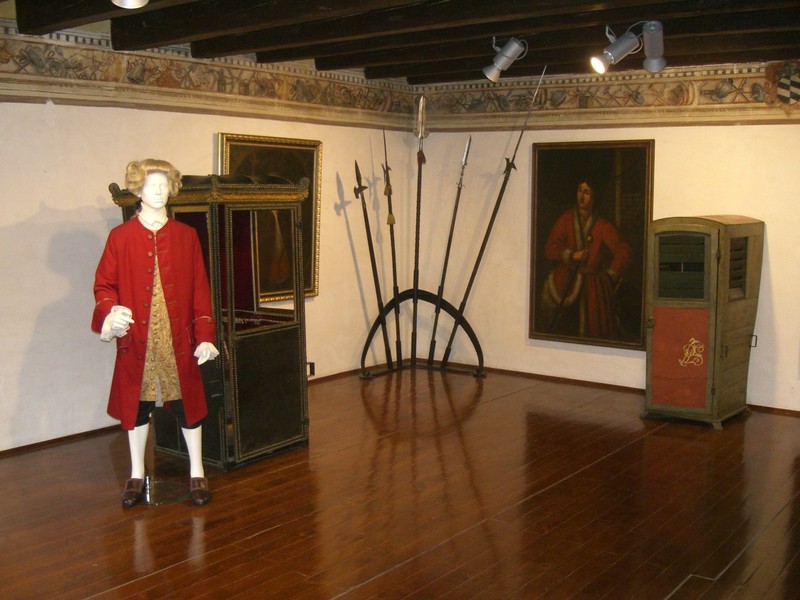 The regional museum is housed inside the Belgramoni - Tacco Palace. It was built around 1600 on the site of a previous building.

Inside you can see an archaeological collection with items found in Istria and also wooden statues, paintings and various furniture. There are also various musical instruments and a rich collection of weapons.

The Belgramoni - Tacco Palace is also used for cultural and musical event. 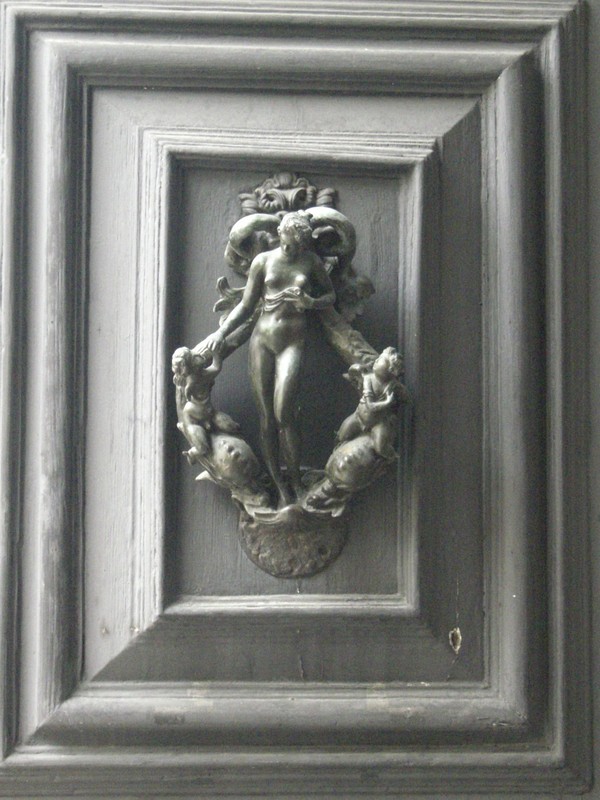 Don't miss the beautiful door knocker of the main door of this palace. 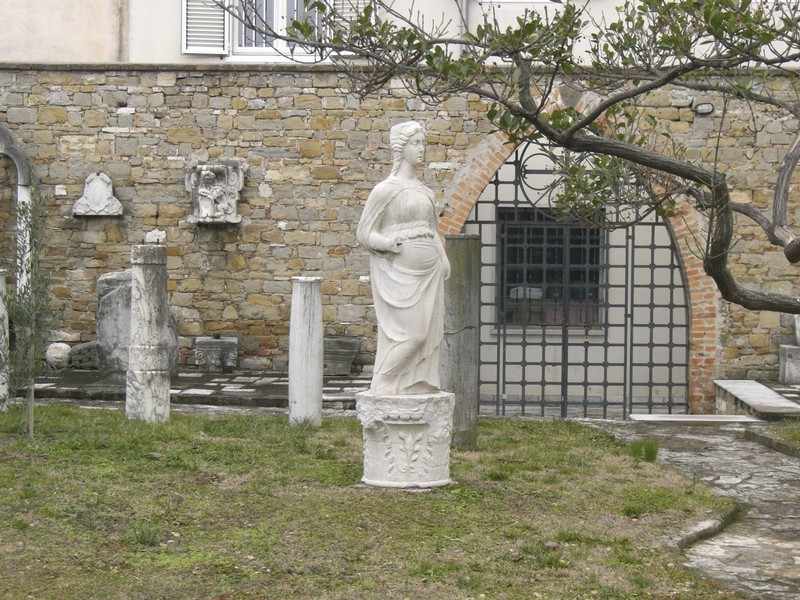 Behind the palace there is a nice garden which is now used as lapidarium. It is part of the palace. 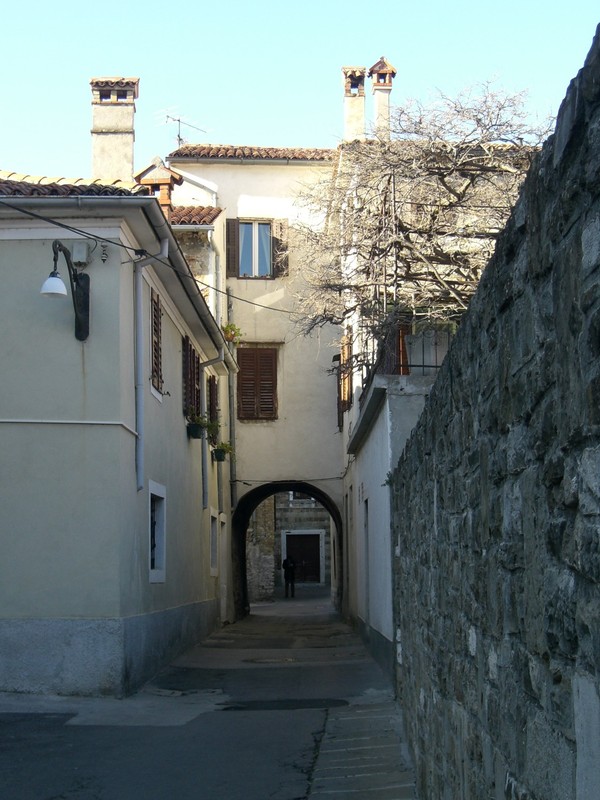 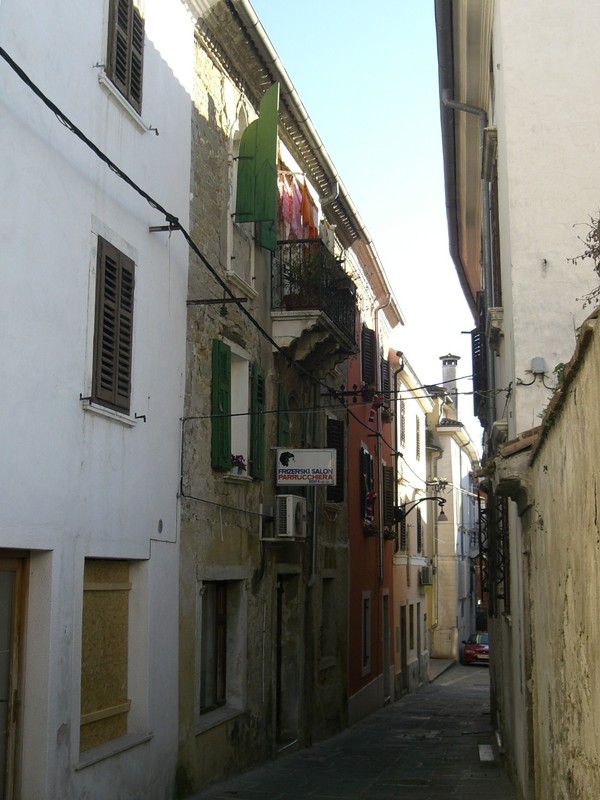 Walking in the old core of Koper it seems to be in an old village. 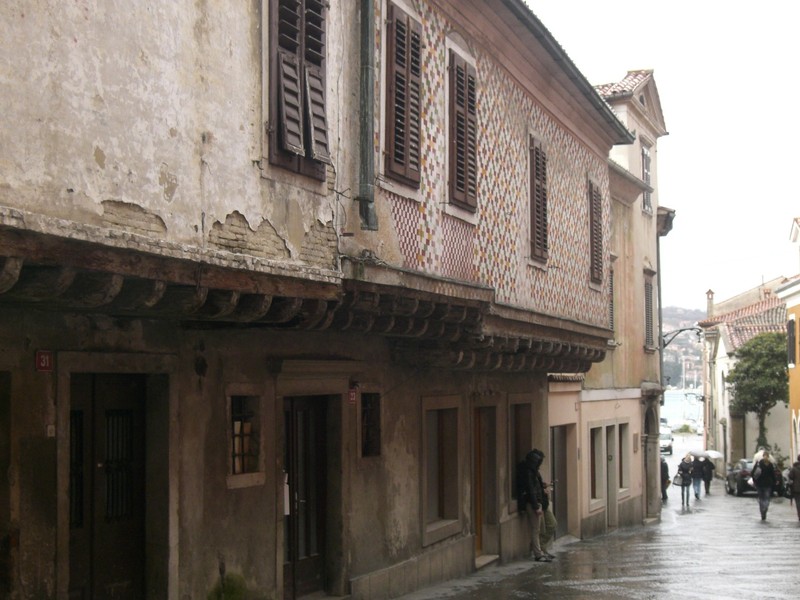 There are even some Medieval houses in Koper. 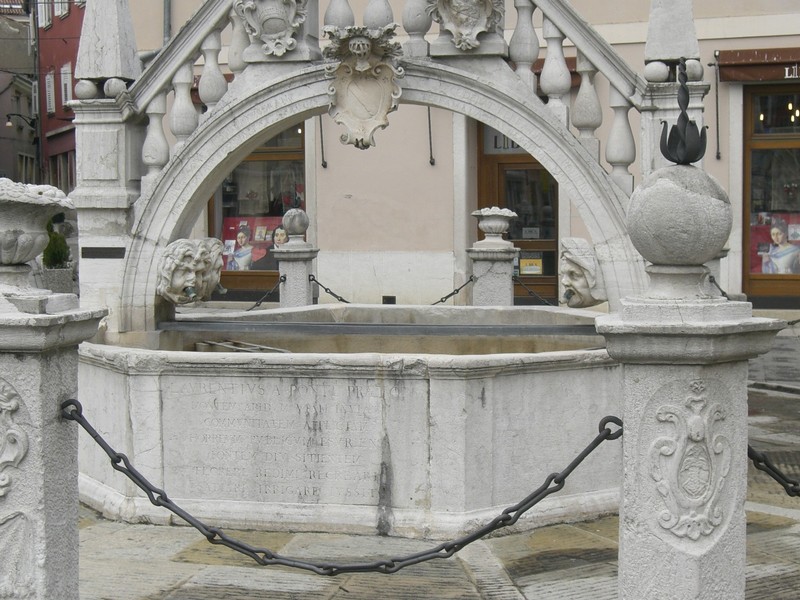 Preseren square was named after the famous poet France Presernov. It is located at the southern end of the old town. 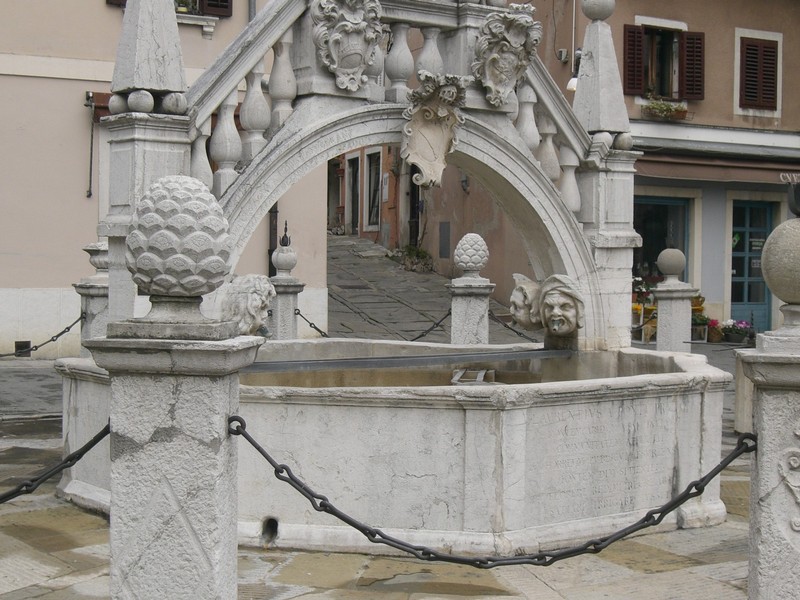 At Preseren square you can see the Da Ponte fountain It was built in the 1666. It supplied the town with drinkable water for several centuries. 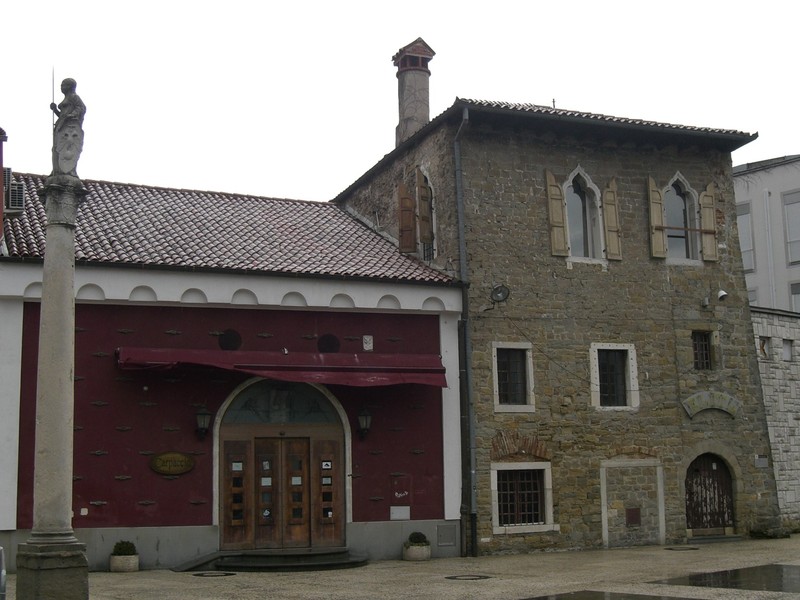 Carpaccio square takes its name from Vittore Carpaccio (1460-1525); a famous Venetian painter. Here you can see the house where he was born. It is located at number 6. Probably it was his son Benedetto who lived there. 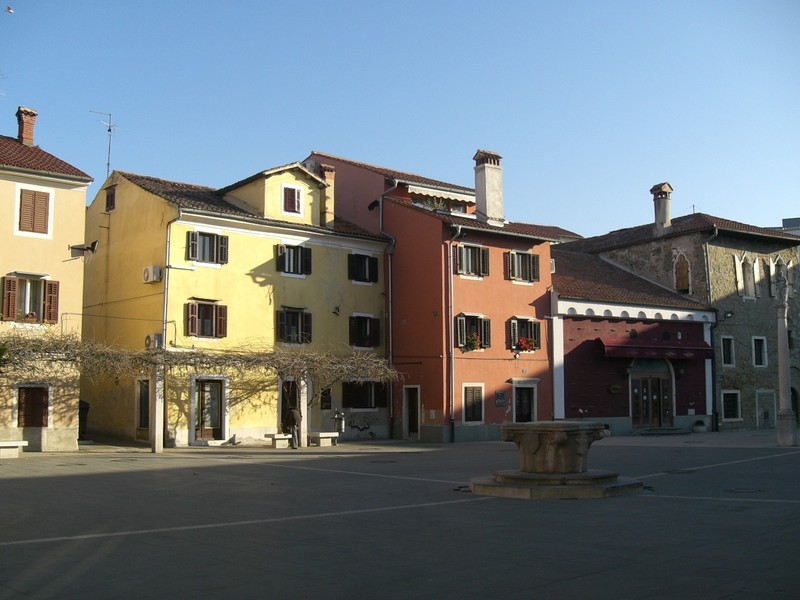 At this square there is also a well taken from Venice; a column built in the 1571 and erected to commemorate the naval victory against the Turks at Lepanto.

There is a old salt warehouse built in the 17th century on this square. Today it is used as an exposition site.

Koper has a large bus station. Unfortunately it is quite far from the town center. I think it is could be two kilometers far. Thus I' d suggest to take a bus to the town center from there. This station has a vending machine for a hot drink and a convenient cafe located outdoor.

It looks like the sun finally came out for the last picture. The colors are lovely.